The Male Gaze vs. The Female Gaze: Sailor Pluto vs. Starfire

Feminists like to throw around the term “male gaze,” but sometimes I think the term is a bit vague. I’ve talked about it some in this post, but I’m always game to examining what it actually means. About two years ago, DC rebooted its characters with The New 52, which included the character of Starfire, in a comic called Red Hood and the Outlaws. You may remember Starfire from Cartoon Network’s Teen Titans. She looked like this:

However, in the New 52 reboot, Starfire came out looking like this: 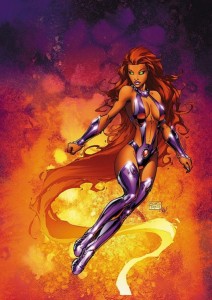 Now, upon looking at this picture, I immediately had two thoughts–which were:

Not only that, but Starfire apparently got a new personality too which many in the DC fandom were notparticularlyhappywith. One dude writer defended these artistic choices, saying that instead of making Starfire into a sex toy, she acts from “the point of view of someone who (did not grow) up here with our Western social norms.” Now, I have to say, it doesn’t take a lady writer/reader to know that to wear Starfire’s outfit, a lady would most likely need to wax her nether regions, but I dunno, I got there in 2.0 seconds. That, and, the “she’s an alien” defense doesn’t particularly hold up for me cuz that would mean Starfire is *very* knowledgable about Western social norms. (That, or she just doesn’t grow hair there—which would be very convenient!)

At any rate, I suppose I was jumping the gun a bit on my first point. If you google “starfire cosplay”, there are quite a few ladies who have no problem cosplaying her revealing outfit.

Anyway, this whole thing made me think about Sailor Moon, of course. Unlike Red Hood the Outlaws, Sailor Moon was written for girls, and drawn/written by a woman. What does sexy look like with the (hetero) female gaze? Is it the same? Is it different? In the Sailor Moon manga, there are lots of sexy images. However, when I think of sexy in Sailor Moon, this image of Setsuna (Sailor Pluto) from Act 44, New Soldiers’ Dream, instantly comes to mind:

I distinctly turning the page and immediately having two thoughts:

I’ve wondered why I had such an immediate negative reaction to Starfire’s outfit, but yet had a positive reaction to Setsuna’s. I think one of the reasons this is the case is that Naoko Takeuchi most likely saw this outfit in a fashion magazine or on the runway, and decided that Setsuna would look pretty smashing in it. I’m not sure I can say the same thing for Starfire’s outfit. Another element that is different between the two outfits is that Setsuna is wearing shorts whereas Starfire is wearing some sort of high cut panties. For me at least, I don’t need to wear high cut panties to feel sexy–shorts are enough! Setsuna also sports a bra and a see-through top, two articles of clothing that are sexy, but familiar enough without having to worry about nipple slippage.

So what would I tell a comic writer/artist about what lady readers want in their lady superheroes? I’d advise them to draw them in clothing that 1) appears in fashion magazines/runways 2) ladies want to cosplay 3) waxing of nether regions is not required and 4) potential nipple slippage is minimized.

Obviously, I’m just one lady and I don’t represent all lady opinions, but hey, I feel like it needs to be said. Putting it out there, folks!

Do you have a favorite sexy outfit from Sailor Moon? Do you think any of the outfits are too sexy? If so, why or why not?