Before the show, my good friend Yosenex and I adventured around Tokyo. Our first goal was to visit every Book Off (a used book store) we ran into and spend at least 5 minutes there. When found our first one in Shinjuku where Yosenex taught me how to find Sailor Moon manga properly. Apparently, manga is sorted by publisher so you need to find the manga with the KC label! In this Book Off we found several first editions of the original manga. I wasn’t aware of this, but Yosenex told me that these volumes (except the first one) had small posters inside. So, for 105 Yen (about $1.00), I bought this beauty: 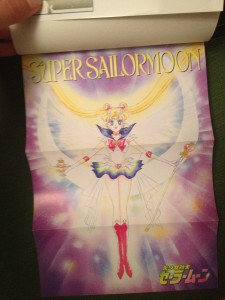 I wish I had bought more! But I was trying to pace myself! ^_^;; My main goal for that afternoon was to check out the Keisuke Kanda x Sailor Moon collaboration at the Shinjuku Isetan. Isetan is a high end department store that reminds me a lot of the Macy’s at 34th street in NYC.

Anyway, we wander into an Isetan, but it wasn’t the right one. But thanks to Yosenex’s Japanese skills and the really nice lady behind the make up counter, we found it!

At the small Keisuke Kanda kiosk, I couldn’t stop taking pictures of the displays! And then some lady told us we couldn’t take pictures. 🙁 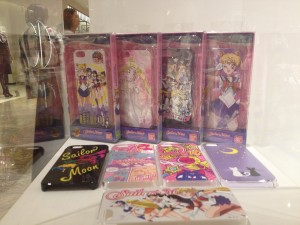 I was surprised to see that the Luna & Artemis case is see-through. I wonder how that would work on my phone. 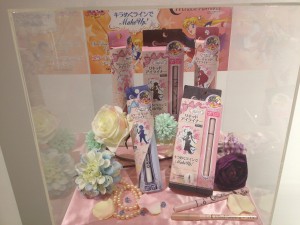 A display for the eyeliner. 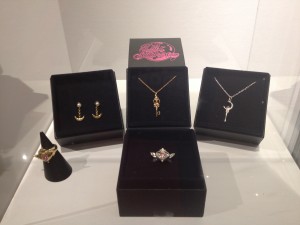 I was REALLY impressed by the earrings. Not sure if I’ll get them, but if I were to get one of these, that would be it!

They also had some figurarts there. 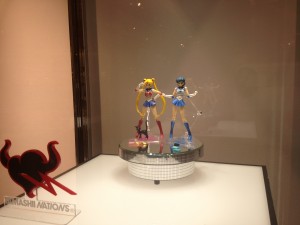 As for the Keisuke Kanda shop itself, the hue of the clothes were whites, creams and pastels. Kinda frilly. I didn’t try anything on; I imagine they were all really expensive. I almost wonder if he designed the new princess dresses in the musical–the aesthetic seems very similar. But I would imagine they would have said something about that, so maybe not. 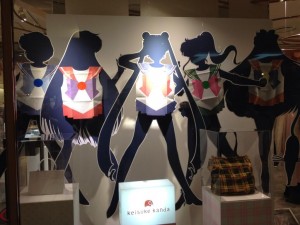 So here we have a huge display with the guardians wearing the paper aprons they were selling for about $15 a pop. I would have bought one, but I was just so confused by them. ^_^;; Are they lobster bibs????? I was looking forward to buying a proper apron…..

They also had this bag there. Now, I love bags, but this one just didn’t do it for me. If they were selling a bag that featured the manga images and was made from a sturdier material, I would have handed over my first born for it. But I can see how it fit with the Keisuke Kanda collection. 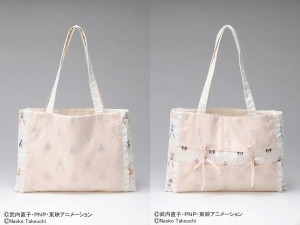 But what REALLY impressed me were the socks! ZOMG!!! Just think of the pseudo cosplay opportunities! If any of you bought these and put together a bangin’ outfit, please email me pics or leave it in the comments. I’d love to see them! I would have really loved to buy these, but I just didn’t have the heart to pay about $50 for them. I might cave and if anyone sells them, I just might end up paying an arm and a leg for them! ^_^;; 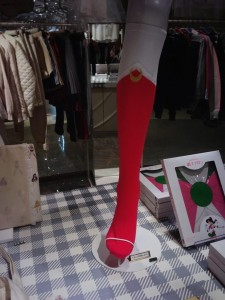 While Yosenex and I were milling about the collection, we met a young Japanese woman who spoke some English. Turns out, she was a big Sailor Moon fan as well! She was super nice and it was pleasure to speak with her.

After our adventure at Isetan, Yosenex suggested we head to Nakano Broadway. He said that particular shopping mall has a lot of vintage Sailor Moon merchandise. To save your hand from scrolling through all the pics I took, I created this nifty video!

To find all this, Yosenex just kept asking the store clerks where we could find Sailor Moon figures, books, artbooks, etc. They were really nice and even called to see where we should go. At one shop, the clerk brought out the second artbook. It was only 2,300 Yen! That’s about $25. I was like, “SOLD!” Then, THEN, he brought out the Sailor Stars artbook (OMG!!) and that was 15,700 Yen (or about $160). At first, I was all, “Oh that’s too expensive!” (You can already tell I’m not a collector, ne?) But then I turned to Yosenex and asked him if it was a good price. He answered simply, “Yes.” Of course, then I remembered I seen the same artbook at Otakon for $400! I really couldn’t pass it up!

I really want to collect all the original art books–with only one new art book coming out next year, I can’t imagine all the artwork that appeared in the previous volumes will make it in there. That, and OMG, over the years I’ve seen scans from the artbooks at places like mangastyle.net, but seeing them in person? *DIES* You can see the pencil strokes! I nearly cried on the shinkansen (bullet train) as I looked at the books on my way to Kyoto.

And speaking of Kyoto, I was able to wander Shinkyogoku, a shopping arcade in downtown Kyoto. I passed by the movie theater I used to go to when I wanted to escape Japan and feel like I was home in America. And guess who I saw on the movie posters! 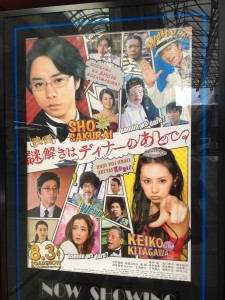 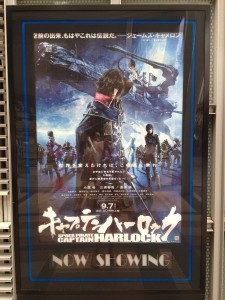 While I was in Kyoto, I couldn’t NOT visit my favorite shrine EVAR, Fushimi Inari! (This shrine is famous for it’s 1,000 tori gates. If you’ve seen Memoirs of a Geisha, these are the tori gates little Chiyo is running through when she makes her wish.) At Fushimi Inari, you can buy a wooden fox face upon which you can draw a face. Of course, I couldn’t resist drawing Sailor Moon! LOL 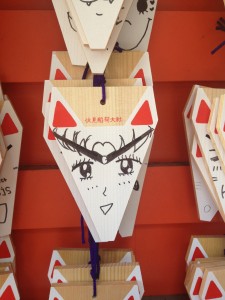 Anyway, this was just a small part of my trip. Hopefully, I can put together a video that includes all of my adventures! Stay tuned!

Next post: The Male Gaze vs. The Female Gaze: Sailor Pluto vs. Starfire