When it was announced earlier this year that the new Sailor Moon musical would have an all female cast, many fans in the West were shocked. What would it be like having Tuxedo Mask–a character who many see as their “first boyfriend”–be played by a woman? However, Tuxdeo Mask wasn’t going to be played by just any woman, retired Takarazuka super star, Yuuga Yamato would be taking on the role. 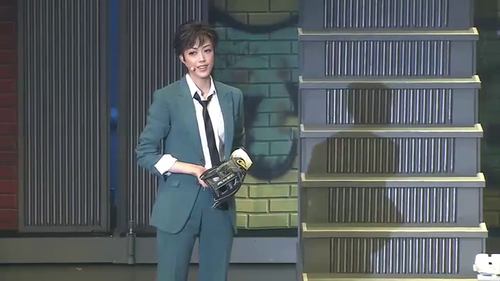 For the uninitiated, the Takarazuka Revue is a theater troupe that consists of only female performers. When performers enter the Takarazuka academy, they are assigned a gender to play based on their look, voice and preference. One might think that the genesis of this theater was quite feminist; however, it was merely a gimmick to get people to spend money.

The Takarazuka Revue was created by Ichizo Kobayashi, president of Hankyu railways, in 1913 so that people would spend money riding on his train line. While he was using the all female theater troupe to draw people to the show, all-female casts weren’t completely unheard of. Historically, kabuki theater troupes were all female until 1629 when women were banned from theater because theater was associated with sexual immorality. (Not so different from the West, I see!)

Naoko Takeuchi is a huge fan of the Takarazuka Revue (Heck, so was Ozamu Tezuka who was from the town of Takarazuka. The Revue provided the inspiration for Sailor Moon’s foremother, Princess Knight.) While I’d argue that the Takarazuka influence was there from the very beginning–only women can become sailor guardians–it’s not until the third season where it becomes apparent. According to the Materials Collection Art Book, Michiru (Sailor Neptune) is modeled after female Takarazuka performers (also called musumeyaku) while Haruka (Sailor Uranus) is modeled after male performers (otokoyaku). However, Takeuchi’s intention wasn’t to recreate a Takarazuka performance in Sailor Moon where Haruka and Michiru were just playing roles–nope, Haruka and Michiru are straight up lesbians. 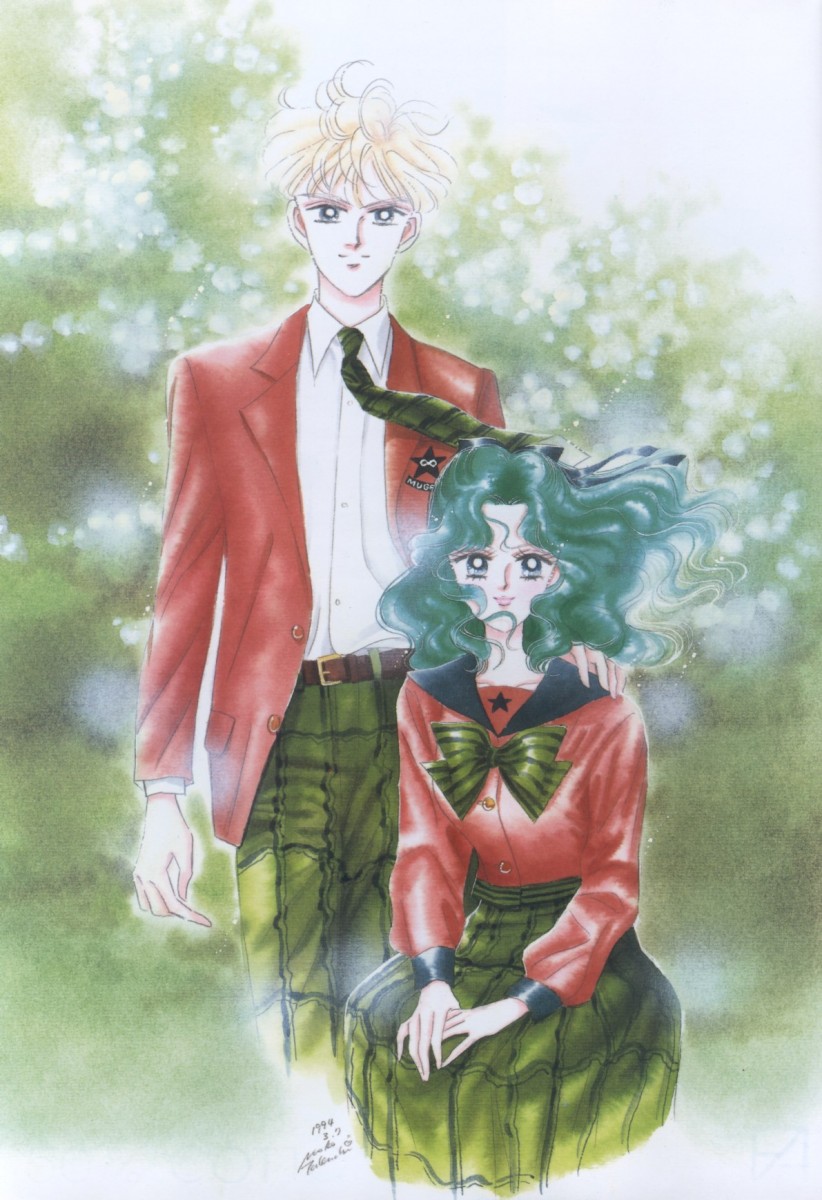 In my obsession with following the Sailor Moon musical commentary on twitter and tumblr, some fans have wondered how a Takarazuka, or “zuka” musical will queer Sailor Moon. At first, I felt that the zuka style would do little to queer Sailor Moon. For example, while Haruka and Michiru are lesbians, characters in Takarazuka musicals are not. In La Reconquista, Zoicite is cis dude, Sailor Mercury is a cis girl and what you are seeing on stage is a heterosexual relationship, not a queer one. In fact, many zuka scholars feel that The Revue isn’t very feminist at all–it reconstructs traditional gender roles, the performers are closely monitored and even the otokoyaku are expected to eventually marry and have babies. Heck, early zuka performances forbid the otokoyaku from wearing wigs because it was too “realistic.” (Page 13, Takarazuka: Sexual Politics and Popular Culture in Modern Japan, Jennifer Robertson)

(You knew there was a ‘but’ coming didn’t you?)

The Takarazuka Revue’s aim may be heterosexuality, but its audience queers the shit out of it anyway! (MUAHAHAHA!!!!!!) As I stood in line for La Reconquista, I admitted to my gay male friend that I was totally attracted to Jadeite–to which he responded, “Me too!” Everyone gets to play this game! Any straight dudes out there attracted to Yuuga Yamato’s Mamoru? And this isn’t a new thing–same sex love declarations by (married) female fans and lesbian gossip has been going on since The Revue started. 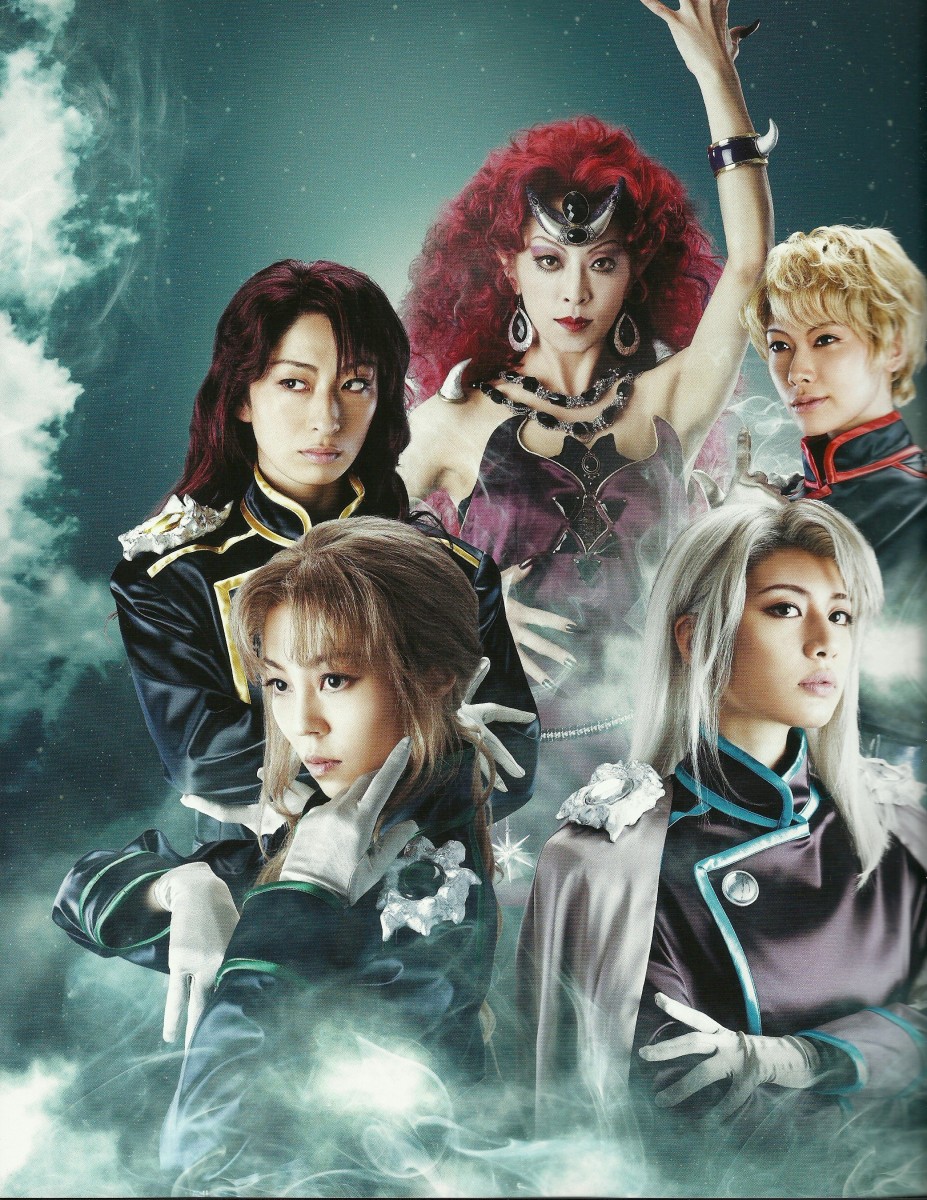 In the case of La Reconquista, sera myu fans have been fangirling all over Zoicite and Sailor Mercury’s relationship. And while the Takarazuka Revue likes to keep a healthy distance from actually promoting “lesbian practices,” the actresses for Zoicite and Sailor Mercury have no problem enflaming fangirl passions! During an interview on God of Backstage, Sailor Mercury’s actress, Miyabi Matsuura, is teased for her off-stage love of Ryo Saika who plays Zoicite. Here’s a translation by ainomessage. You can watch the full translated interview here.

Yuu (Jupiter): Miiyan is always like “I hope Ms. Saika gets here soon!!”

Miyabi (Mercury): My mom is actually worried about me. She’s like “It’s okay, I don’t have any problems with people who like girls.”

Host: So your mom has sanctioned it?

At first, I was a bit shocked–was Miyabi’s mother really ok with her daughter being a lesbian?! But as I read more about the Takarazuka fandom, it became clearer that may have not been her mother’s intent. In Takarazuka: Sexual Politics and Popular Culture in Modern Japan, author Jennifer Robertson explains that “shoujo” doesn’t mean just any ol’ “girl,” but it specifically means a young woman from the time of puberty until she gets married. So, basically, a young woman like Miyabi. In Takarazuka, Robertson cites a zuka fanzine from 1955 that explains why it would be ok for a young woman to be in “love” with an otokoyaku:

One seventeen-year-old student thought about making [sexual] love (koi o shiyō to omoimashita). She got together with a boy, but didn’t have the courage to follow through. Disappointed, she became lost in her thoughts. On her way home from school one day, she passed by a souvenir shop and became enraptured with a photograph of a Takarazuka otokoyaku. Here was her ideal man, epitomized perfectly by the actor.

She thought about how if she actually got together with a male, she would become trapped in a feudal household system, and if she got together with a female student, the relationship might not work out. If a young woman chooses same-sex love, and if she happens to be infatuated with an otokoyaku, then her female partner should be dressed “as if” she were actually male but more handsome and more refined. And because both partners are female, this being a case of same-sex love, their fathers won’t scold them.

There’s a lot to unpack there. But it strikes me as very similar to the sexual adoration young teen girls express for boy bands such as One Direction or Justin Beiber. In the West, having a sexual relationship with an actual boy or girl might not be acceptable in a young woman’s family, but fangirling over a celebrity is completely acceptable.

Miyabi’s love for her female co-star reminds me a lot of episode 96 of the Sailor Moon anime. In this episode, Makoto (Sailor Jupiter) becomes enraptured by Haruka (Sailor Uranus). Usagi is completely against Makoto dating girls while Rei just can’t believe that Makoto would chase after a girl—that is, until Usagi asks her about her Takarazuka book. Rei is completely embarrassed by this admission! 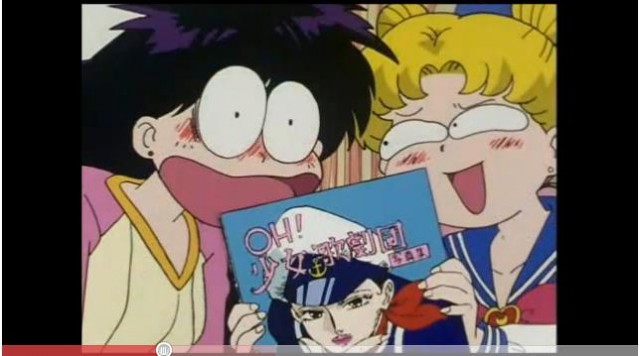 Many (western) fans believe this episode is proof that Makoto is bisexual, but considering Haruka was modeled after otokoyaku, I think there is something else going on here. Like Miyabi, Makoto’s love for Haruka is considered “safe” for a “shoujo.” It wouldn’t be until these young women are expected to get married that their love for another woman would become a serious problem. (Although in this episode, Usagi is upset nonetheless!) Towards the end of the episode we learn that Makoto’s feelings towards Haruka aren’t sexual, but Makoto considers her to be the ideal woman she wants to become. Which seems to me to be a twist on zuka fandom where the otokoyaku would be the young woman’s ideal boyfriend.

Overrall, the all-female cast of La Reconquista has been well received by the Sailor Moon fandom I’ve encountered. Even fans who were nervous about a “femme” Tuxedo Mask have been won over by Yuuga’s exceptional performance. I’m really glad that we had this opportunity not only to see these amazing performances, but to have our notions of gender and sexuality queered–even if it’s just a little bit. 🙂

Next post: 7 Reasons the ‘Carrie’ Remake is Better than the Original

Previous post: The Male Gaze vs. The Female Gaze: Sailor Pluto vs. Starfire