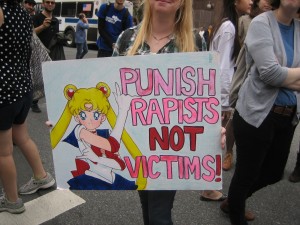 In 2011, Toronto, Canada, a group of students attended a campus safety information session where a representative of the Toronto police gave this advice: “women should avoid dressing like sluts in order not to be victimized.” Unfortunately, this representative must have been talking out of their ass because people of both sexes, all ages, professions and styles of dress have become victims of sexual assaults. Dissatisfied that authorities would only blame them for assaults committed against them, these students began a world-wide protest movement called SlutWalk.* Activists hoped these protests would bring more awareness about the realities of sexual assault.

In October 2011, I was able to attend the SlutWalk protest in New York City. At St. Mark’s, I spotted the above Sailor Moon sign and I practically tripped over my pilgrim dress (I was sporting a Hester Prynne outfit with a prominent A+. HEHEHE.) to get the above photo. I think Sailor Moon would agree that wearing a short skirt or knee high boots isn’t an excuse for sexual assault! I also admired the word play on the sign that referenced Sailor Moon’s signature speech: I’m Sailor Moon, champion of love and justice– and in the name of the moon, I will punish you!

Here’s a video of the introduction done in 14 different languages. Expand the description section to skip ahead to your preferred language.

However, it wasn’t until a few months later when I was knee-deep in my re-watch of the subbed SuperS season that I realized just how much Sailor Moon touches on sexual assault and victim blaming.

The fourth season of Sailor Moon, or SuperS, features a trio of villains from the Dead Moon Circus called the Amazon Trio. 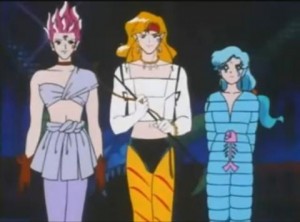 These guys are much like the Trio in the sixth season of Buffy the Vampire Slayer: dudes who sit around thinking up misogynistic ways to prey on girls and women (and well, in Fish Eye’s case, boys and men.) The Amazon Trio sit around in their own little bar looking at pictures of potential victims, dreaming up schemes to lure their victims into a vulnerable position. Often times this means they are looking to take advantage of feminine qualities. In episode 130, Hawk’s Eye targets Usagi’s mom by pretending she’s his long lost mother. He reveals to his comrades that her kindness and maternal instinct will make his job easy. Tiger’s Eye also blames his victims for their own assaults:

Even more disturbing, the Amazon Trio strap their victims to a board and then they physically stick their head inside the victim’s dream mirror while the victim screams out in pain.

And if that doesn’t strike you as a metaphor for sexual assault, it’s worth noting that the Amazon Trio’s successors, a group a young girls called the Amazoness Quartet, use pool cues and balls to knock the dream mirrors out of their victims. They don’t even have to “penetrate” the inside of the mirrors either.

At any rate, there I was, watching episode 147 where Makoto wants to dance with Tiger’s Eye alter-ego and waits all night in the rain for him and I was yelling at Makoto in my head, “HELLO GIRL! HAVE SOME SELF-RESPECT! I WOULDN’T HAVE WAITED THAT LONG!” Super Sailor Moon and Super Sailor Chibi Moon soon arrive at the scene proclaiming that there’s no reason to blame a young girl’s emotions in place of someone else’s dishonesty. And it hit me! Here I was blaming Makoto for the situation when I should be blaming Tiger’s Eye for being a douchebag!

This episode made me think back to SlutWalk and how our society tells girls and women to act and dress a certain way, yet uses these very things to blame them for their sexual assaults. I think we all need to take a page from Sailor Moon and place the blame where it truly needs to go: on the perpetrator.

*Some organizations chose not to use the phrase “SlutWalk” specifically.