Many people have noted that the Sailor Guardians are pretty sexy with their short skirts and high heels. Even Dateline thought Sailor Moon was a “bombshell.” But even though the Sailor Guardians yell “Make Up!” and the end of their transformation call, they actually don’t wear make up. (Well, unless you count nail polish. And, notably, their nails remain short. The outer guardians, who are two years older, do get some lipstick during their transformation. Live Action Sailor Moon also transforms with a tube of lipstick.) 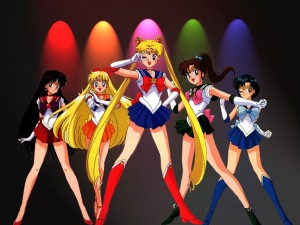 The sailor guardians not wearing any lipstick, eyeshadow or blush! Credit: www.wallsave.com

So here’s our image of “good sexy”–short skirts, high heels, but no make up or cleavage. And what I find interesting about this image in particular and others like it, is that the artist doesn’t go out of their way to “sex it up.” In other words, there are no boob or butt “gleams.” Sailor Moon is popping out her hip a tad, but overall, you could probably could stick a dude superhero in one of these poses and it wouldn’t be read as feminine.

Anywho, so here is the adversary in the first season, Queen Beryl. She’s has long red nails, wears make up and a form fitting dress. Her dress also sports a boob window. 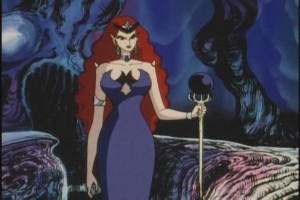 Meanwhile, Sailor Moon’s mom, Queen Serenity, gets a big ol’ bow to distract you from her boobage. And she’s all dressed in white in case you forget she’s a good guy. 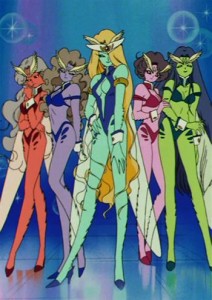 The Sailor Guardians meet the Doom & Gloom Girls (or DD Girls) in their final battle against Queen Beryl in the anime. As you can see, they are wearing little more than underwear/bikinis. They are powerful enough to take out the Sailor Guardians, but they end up being destroyed in the progress. Their job is to die and look sexy while doing it. It’s as if their revealing clothing tell you that they are disposable, that violence should be acted upon them. Our society seems to think that scantily dress women and girls should expect violence. I wish this just happened in the cartoon world, but this happens to young women and girls in real life.

Naoko Takeuchi has said that the anime has a “slight male perspective” and nowhere is this more apparent than in the third season where all of the disposable, monster-of-the-days are female. 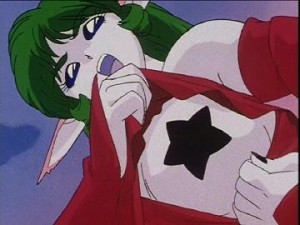 These monsters created from inanimate objects, and when they attack, they uncover a part of their female body to reveal a black star. Good grief. Talk about “bombshell”–they are *literally* attacking with sexualized lady parts. WTF.

Thankfully, in the fourth season, this theme does not continue, but we do get the Amazoness Quartet, who show lots of boob and midriff. In the manga, they are redeemed and become sailor guardians themselves–complete with new outfits that cover up their midriffs, cleavage and groins. 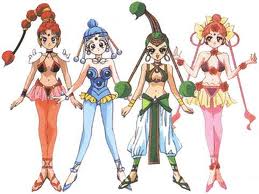 The Amazoness Quartet as villains 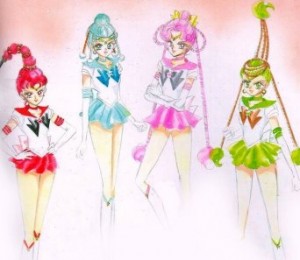 The Amazoness Quartet as heroes, the Sailor Quartet Credit: Wikipedia 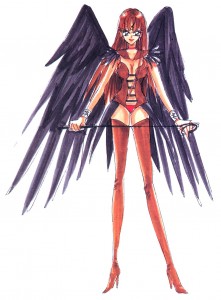 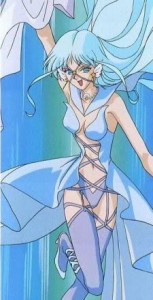 To be fair, we also get the Sailor Starlights who I’d argue are the sexiest good guys in the Sailor Moon Universe. They’ve got short shorts, bare midriffs and deep neck lines–all in leather to boot! (Or at least, it looks to me like leather. Maybe it’s pleather? :D) I also wonder if the Starlights’ outfit isn’t so much to balance the Animates, but to reassert their femininity after spending their civilian time dressing as men.

Treatment-wise, the Sailor Animates get to stick around more than one episode in the anime and the Starlights are the only guardians who manage to be there with Eternal Sailor Moon until the very end.

All in all, it amazes me to what lengths creators can go to sexualize villains even more than than the already sexualized good guys. The idea that ‘sexiness is evil’ distorts what it means to be evil—which is to do morally corrupt actions, not to be scantily dressed.