How SAGA Won My Heart 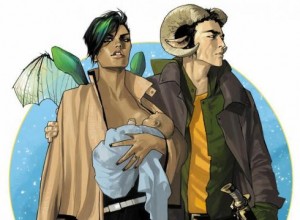 I’m sure this doesn’t come as a huge surprise–I’m not much of an American comic book reader. My shelves consist of scores and scores of Japanese manga, no American “graphic novels” in sight. I’ve always meant to rectify this, to assuage my guilt over this lack of support. It wasn’t until years ago when I bought the prequel issues of The Guild that I finally owned an American comic. I absolutely loved these issues (and you totally check them out if you haven’t already!), but they were just a few stand alone issues, not a full blown series. I was still on the hunt for a good American comic book series I could throw my money at.

After hearing about the new X-men series featuring an all-lady team, I gleefully waltzed into my local comic book shop and purchased the first three issues. Unfortunately, my enthusiasm was short lived and I completely lost interest by the third issue. I’ll save the reasons why for another post. However, I did come out of the experience realizing that I wasn’t much of a single issue person (unless it’s a single issue of Sailor Moon. GIMME! GIMME!) I’m a book person at my core so at least I knew my new adventure would have to involve a collected volume.

My next trip to the comic book store would change everything.

I had wondered into the store one day, again hoping there might be something in their manga section that would perk my interest. Alas, no dice. My eyes wandered around the store, finally resting on this comic which stood at my eye level, face out on the shelf:

There was something about the woman with the staff that I was immediately drawn to. Perhaps it’s because I follow queen nepy on tumblr, who often reblogs similar images of beautiful black women. Or, perhaps, it’s because as I love images of women who are sexy, but not sexualized. Here you have a woman who has a strong stance, carrying a weapon, and wearing a blazer/short combination that looks like something that ZARA would send down the runway. At this point, I’m intrigued. 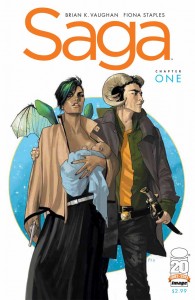 As a feminist, I often hear stories about how some people think that breastfeeding in public is gross, inappropriate or illegal. But here, the green-haired woman seems to be saying, “Yeah, I’m breastfeeding on this cover, you got a problem with that?! I’ll kick your ass AND breastfeed my kid at the same time!” This was woman who I would most definitely like to have a beer with. I had to know more!

I opened the book to the first two pages and I screamed with shock and laughter:

Now, I’ll have rewind here a little bit. During my days as a elementary/middle/high school student, I actually never learned about pregnancy. Sure, I learned about periods. I carried around an egg that was supposed to represent a baby. But I never had the pleasure (??) of watching an actual video of a baby being born. It wasn’t until a co-worker at my office job admitted that she was deathly scared of pooping during her daughter’s birth that I learned that shit was possibly involved with bringing life into the world. I was under the assumption that flowers and sparkles were involved. Guess not! *sadface* So, when I saw these two pages I just DIED and knew I had buy this book.

Unwittingly, I had just purchased SAGA–the hottest comic book out there. Winner of three Eisner Awards in 2013, SAGA is a sci-fi/fantasy adventure written by the esteemed Brian K. Vaughn and illustrated by the talented Fiona Staples. SAGA tells the story of Alana and Marko, two star-crossed lovers whose home planets are at war. The story opens with the birth of their daughter and begins an action-packed, inter-galactic game of cat-and-mouse filled with fantastical characters and worlds. Basically, it’s like if Star Wars and X-Men had hot, passionate sex and birthed a beautiful feminist baby.

Fans of Japanese animation and manga may also be interested to know that co-creator and illustrator, Fiona Staples grew up drawing anime fanart and currently uses Manga Studio to create the breath-taking pages of SAGA. The art of SAGA retains the realistic and gritty look of American comics, but I’m not gonna lie, every time I look at Alana, I keep thinking of BAMF Lieutenant Lucrezia Noin from Gundam Wing. 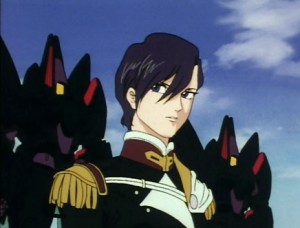 I miss you Noin! Credit: Death by Gundam

If you are a long time manga fan looking to dive into American comics, I highly recommend SAGA. It’s everything you’ve been looking for. I am not shitting you. The third volume hits stores and e-readers next week, March 25th 2014.


Disclosure: Any purchases made from the above links supports Shojo Power! Thank you for your support!

Next post: Bedknobs & MoonSticks: An Interview with Chibi Jen

Previous post: Blame It On the Sluts: Nostalgia Critic’s Review of Sailor Moon