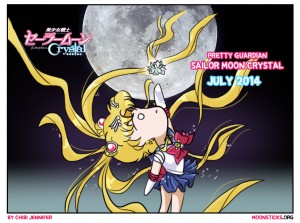 Sailor Chibi Moon may have the word “chibi” in her name, but she’s not the only “chibi” around! Enter the popular webcomic Moon Sticks which has been entertaining moonies for over five years. Moonsticks.org is a weekly four panel comic that transforms the sailor soldiers we know and love into tiny, adorable chibis and crack jokes that any moonie can appreciate. The creator of Moon Sticks, Chibi Jen, was gracious enough to answer my questions about how this webcomic comes to life.

Chibi Jen: I was first exposed to the English DiC version of Sailor Moon when it first aired here in Australia. It was around 1994 and I was 7 years old at the time. It was shown on a morning children’s program called “Agro’s Cartoon Connection.” I remember flipping to the channel and saw Sailor Moon’s transformation sequence. Oh my goodness… I was completely blown away. I had never seen ANYTHING like it before and it was simply mesmerising. Since then, I followed it religiously every morning and it was the best part of my day. 😀

Anne Lee: I got into it around that same time too! So fast forward to 2009. What made you decide to create your webcomic MoonSticks?

Chibi Jen: At the time I was running another Sailor Moon fansite called Chibi Land. I started Chibi Land in year 2001, and was wondering what I could do to celebrate its 8 year anniversary. Then one day, pretty much out of nowhere, I said to my boyfriend “I’m going to make Sailor Moon comic strips! It’s going to be called MOONSTICKS!” That’s pretty much what happened, haha! The original plan was to make cute random Sailor Moon doodles as a new feature for Chibi Land, but I loved the name “MoonSticks” so much I wanted to make it its own thing. So I did 😀

Anne Lee: Sometimes great ideas simmer in the subconscious and then they just rise to top! I must say, when I saw a MoonSticks strip for the first time, I was all, “EMERGAWD!! IT’S SO CUTE!!!” and exploded into a million tiny moon-shaped pieces! How did you decide on the distinct style? I’m guessing you took some inspiration from the chibis that were featured on Sailor Moon Channel?

Chibi Jen: Awww, thanks! hmm… I’m not really sure it’s the Sailor Moon Channel. They were my inspirations for the Chibi Dolls, but not really for MoonSticks. I’ve always liked drawing them in super-deformed/chibi style, and went with that. My style has also changed a bit since I first started them, as you can see in comic #1 the line work is much more sketchy looking. I soon decided a cleaner look would be better. Their eyes also evolved from having some shape, to just circles XD

Anne Lee: I can totally see that. Tell me about what goes into making the weekly comic. Where do you start?

Chibi Jen: I think coming up with an idea and finding ways to make it funny is the hardest part, so I spend a lot of time brainstorming. I do this on a daily basis, whenever I have a moment on my own, while sitting on the train, while I’m walking to work etc. I scribble and doodle a lot. Once I’m happy with an idea I start fleshing out a storyboard on scrap pieces of paper. I then do my research by looking up specific scenes, making sure all the details are accurate. From there, it’s a matter of drawing it up with my wacom tablet and giggling at my own jokes.

Anne Lee: I giggle at my own jokes too. XD Do you have a favorite strip? (or a few favorites?? I know it can be hard to choose!)

Chibi Jen: Yes I do! My top three personal favourites would have to be #20 Professor Tomoe’s Mind, #38 A Sailor Soldier’s Pride and #57 The Outer Senshi’s Fall 😀

MoonSticks #20, Professor Tomoe’s Mind, has a pretty special place in my heart. I remember it was almost 2am on a Thursday night, and my comics get posted up on Friday mornings. I had drawn out the 4 frames, but I had no idea what to put in the last one. I was feeling stressed out when all of a sudden- “two oranges and a banana” came out of no where! I was really surprised by how random it was and it made me laugh out loud in the middle of the night 😀

I love MoonSticks #38, A Sailor Soldier’s Pride, because who doesn’t love a Uranus joke? XD I’ve always enjoyed watching the rivalry between the Sailor Starlights and Outer Senshi, so putting the two jokes together into one was pretty fun. The comic should’ve been called “A Gentle Uterus and An Angry Anus” XD

And of course…MoonSticks #57, The Outer Senshi’s Fall, is just too adorable. I make fun of poor Pluto a lot. 😀

Anne Lee: I loooooove #20 Professor Tomoe too! I also really like #17 Sailor Moon’s Power Up! I’m surprised Sailor Moon hasn’t fallen over yet too! ^_^;;;;; I also love a good Uranus joke. Everyone makes fun of “Gentle Uterus” but I kinda like it. If an eventual dub changes it–so help me, I’ll be the one with an angry anus!! A Gentle Uterus and An Angry Anus INDEED! *dies* 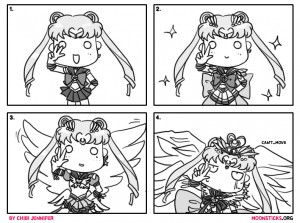 Anne Lee: As I was going through the comics, I was thinking that maybe you would favor one season over another, but it seems pretty equal to me! Do you go out of your way to do that? Do you think you favor any characters over others?

Chibi Jen: haha yes, I do try to give the characters (and seasons) a fair share of coverage, but sometimes jokes about specific characters come to me more naturally. For example, Usagi is featured the most in MoonSticks, because there’s just more to work with since she’s the main character (and my favourite XD)

It does become quite a challenge sometimes when I’m working my brain away trying to come up with something for a character I haven’t thought too much about. I want to produce quality comics that I’m happy with, so sometimes it’s best to just go with the flow and make a comic based on whatever idea I like the best (at the time).

I tend to favour the Outer Senshi more than the Inners, especially Sailor Pluto and Saturn. These two never got enough screen time in the Anime series so I wanted to give them some love here 😀

Anne Lee: Changing gears a bit here–you are a graphic designer/web developer by day and obviously those skills come in handy with creating moonsticks.org. How has being a Sailor Moon fan (or the creator of MoonSticks) influenced other aspects of your life?

Chibi Jen: Sailor Moon got me into drawing, introduced me to anime, fuelled my love for Japan and unlocked my passion for web design. I became interested in web development while learning to build my first Sailor Moon fansite (I really just wanted a Sailor Moon site!) After High School, I left for University where I studied Digital Media and decided this was the industry I wanted to work in. Now it’s both my job and my hobby! I still try to keep these two things separate, and making comics is my way to relieve my childhood memories.

Anne Lee: I love hearing stories like that! I can’t wait to see with what you come up with next. Thank you so much for taking the time to answer my questions! 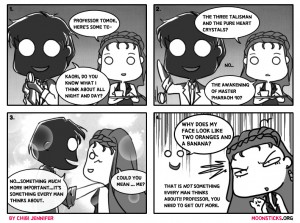 Next post: The Meaning of Moon Prism Power, Make Up!