The Meaning of Moon Prism Power, Make Up! 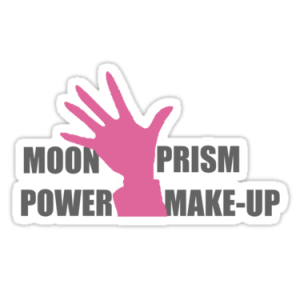 Moon Prism Power, Make-Up! It’s the phrase our heroine uses to transform from an ordinary school girl into the legendary Sailor Moon. It’s as recognizable as the Power Rangers’ “It’s morphin’ time!” or the Avengers’ “Assemble!” But for fans of Sailor Moon, this transformation call isn’t just any old catch phrase. It’s an incantation that conjures much more.

Fans who have seen the DIC English dub will know the transformation call was tweaked just a bit–the ending “make-up!” was dropped, leaving the last word “power” instead of “make-up.” Consequently, the cadence of the call was changed to punchy, three syllables with the word “power” drawn out.

I could harp on this change, but I can understand why the change was made. Despite our sexy movies and TV shows, North American culture is very conservative in a lot of ways, especially when it comes to young girls wearing make up. In other words, being against the sexualization of young girls is one thing both conservatives and liberals can get behind. I can imagine a parent writing an angry letter, “Why is this superhero teaching my young daughter to wear make up?! She is too young for that!”

Personally, I am quite partial to this version because it puts the focus on a young woman displaying power. What does it mean for a woman to have power? It’s a question that goes straight to the heart of feminist theory and Sailor Moon. It’s also a question that’s incredibly relevant in our every day life. Why, for example, are there so few woman in leadershippositions? If girls are supposed to be “nice”, how can they make difficult decisions or tell others what to do? This preference was one of the reasons I named this blog Shojo Power! I figured I would be doing a lot of thinking about the nature of power.

As fans of the English dub cherish the make up-less phrase Moon Prism Power!, other fansfind the words make up deeply meaningful. In the January 2014 issue of ROLa Magazine, long time Sailor Moon fan Shounen Aya reflected on the meaning of these words:

Shouting out the phrase “Make Up” was a new phenomenon. For the first time, it wasn’t being used to get “love” from the opposite sex, or to be a “mask”, but it was used for genuine self satisfaction.

Indeed, this transformation call is used to become a hero–to save the world. For me, the words make up mean sacrifice. In the 2013 musical, La Reconquista, the sailor guardians use their transformation calls to give up their lives to awaken Sailor Moon. It’s a scene that still sends shivers up my spine!

For fans of the anime, make up may also mean determination. I’ll never forget this scene in Sailor Moon S, where Sailor Moon is desperate to transform into Super Sailor Moon. Instead of our usual happy-go-lucky heroine, Sailor Moon desperately screams Crisis Make Up! repeatedly, even slamming her fist on the ground over and over again.

Even Kotono Mitsuishi, Sailor Moon’s Japanese voice actress, has strong emotions about this scene over 20 years later which she describes in this interview.

In your opinion, which scene in the long-running “Sailor Moon” series is the most impressive?

Osabu Why is that one your favorite?

Mitsuishi When we’re lipsyncing the lines, we have to say them without actually speaking. And when we’re recording, you have to say the lines to match the animation. But during that scene, I could scream it out exactly as it came naturally, and the animation was modeled around that. I think it came out beautifully.

Osabu Was that your first time as a voice actress doing anything like that?

Mitsuishi Yeah, it was the first time I really felt like “Sailor Moon”.

Moon Prism Power, Make Up! has really become a rally cry around the world. What does it mean to you?