Claudine is a short, one-shot story about a young aristocratic French man assigned female at birth in the early 1900s and his many love affairs with women throughout his life. Many readers of Claudine have been thrilled to have a manga in English–one written over 40 years ago no less–that’s empathically about a trans man. They’ve noted that it doesn’t have a happy ending, so it doesn’t provide a hopeful and positive story about being trans. I find myself similarly thrilled but also full of caution. So, first let’s talk about the positives.

One of the things that I absolutely love about Claudine is the rendering of Claudine’s feelings on the page. Near the beginning of the story, Claudine experiences his first love and first kiss with Maura, his family’s young maid. However, his mother walks in on them and subsequently banishes the young girl from the house. With his first love ripped from his life, Claudine is filled with “unspeakable rage.” I was completely struck by this panel–Claudine doesn’t react to this incident with despair or self-loathing, he reacts with rage that his sexual desires have been denied. 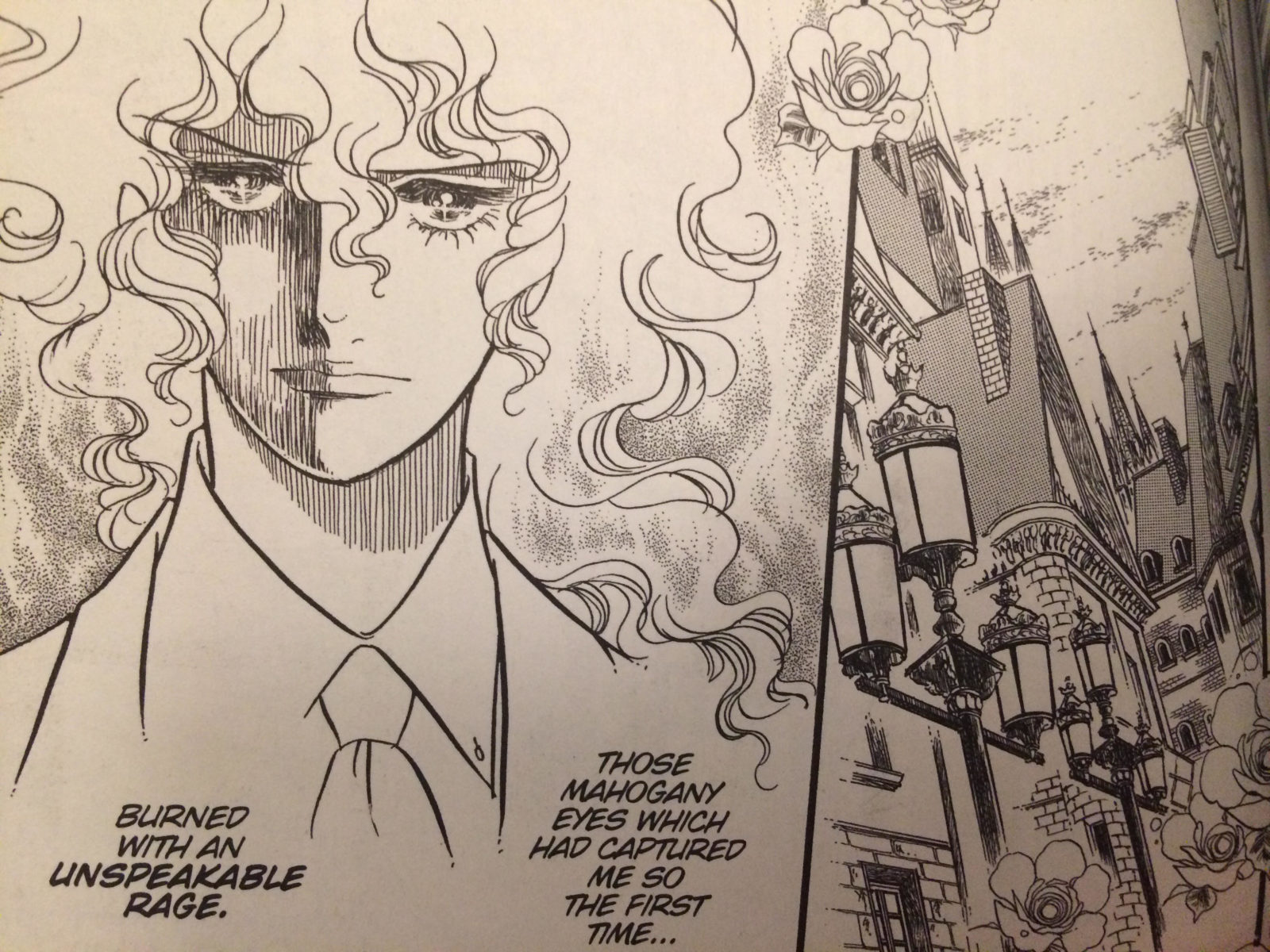 In another scene, Claudine’s new love interest Cecilia rejects Claudine’s advances. Claudine accuses Cecilia of using him; Cecilia responds that a sexual relationship would never happen because Claudine is a girl. Cecilia’s response sends Claudine into an emotional tailspin. I love how these scenes validate Claudine’s feelings in such a striking and visual way. 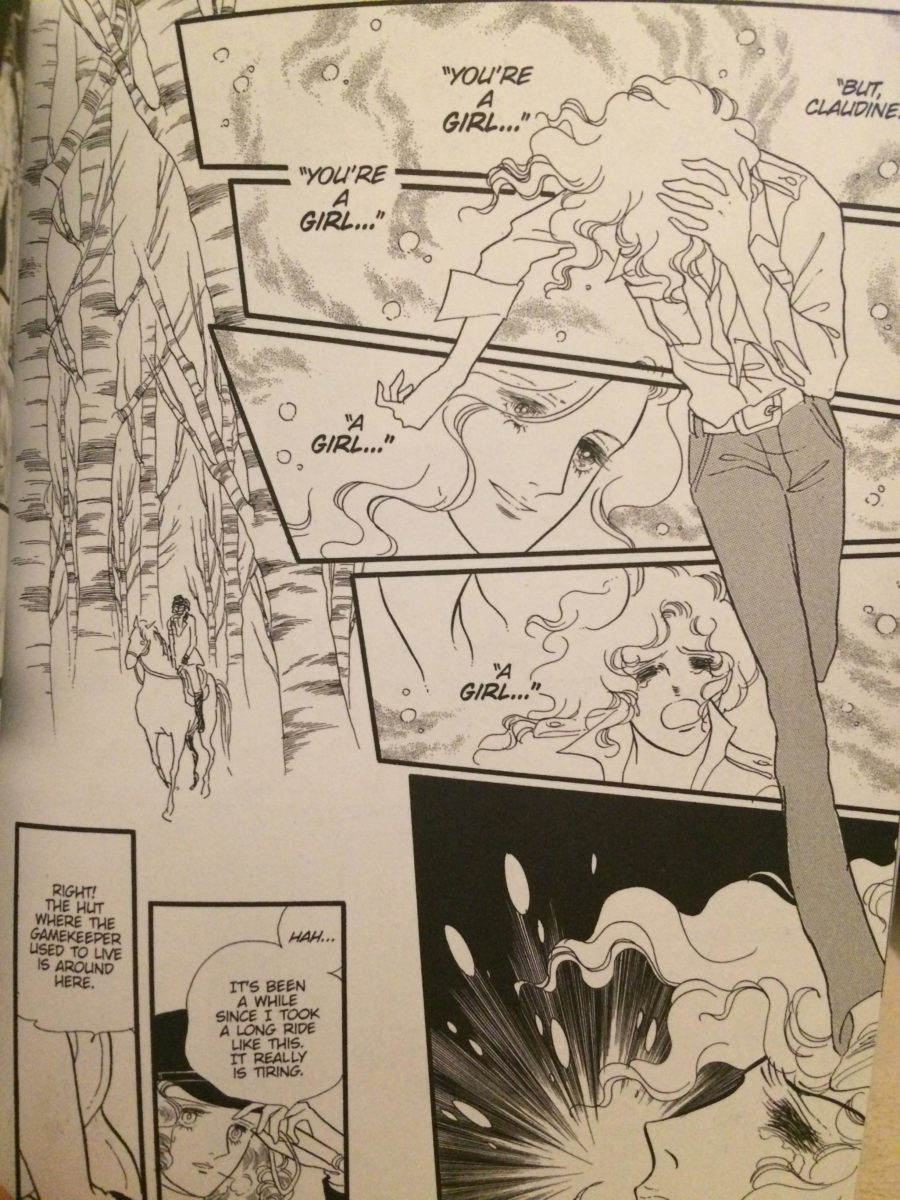 So while Claudine is very much a story that validates a trans man’s feelings, I do want to point out a few red flags that floated about in my head while I read Claudine.

For example, Claudine seems to have more difficulty in his love life than moving about in society. Claudine goes on to attend college as well as getting a “special membership” into a men’s club. This stands out in contrast to real life stories such as in The Bride was a Boy and Missy de Morny who had the opposite problem; they had no problems in their love lives, but had trouble with societal institutions recognizing their gender. Moreover, everyone in the story seems to know that Claudine was assigned female at birth. I found this to be similar to Oscar’s situation in Rose of Versailles. There are some pros and cons to this. On the positive side, no one accuses Claudine of deception. On the negative side, there aren’t any scenes where Claudine and his lovers communicate their intimate sexual desires in clear and positive way. Which leads me to the one issue in Claudine that really irritates me.

There’s a subtext to the story that ultimately, Claudine’s fatal flaw is that he doesn’t have a penis. The story seems to conform to Freud’s idea about penis envy. In other words, the world revolves around penises and vaginas are some how secondary and deficient. During the course of the story we learn that Claudine starts identifying as a boy after walking in on his father having sexual relations with a man. Not only that, but to Claudine’s distress, Claudine discovers that his crush, Cecilia, also has been having a sexual relationship with his father. Having a penis does not prevent Claudine’s father from getting the relationships he wants, unlike Claudine where his vagina seems to cause problems for at least two of his paramours. The final nail in the coffin comes at the climax of the story where Claudine’s lover Sirène leaves him for his brother. (And Claudine’s brother literally doesn’t have to do more than just show up at Sirène’s door.) 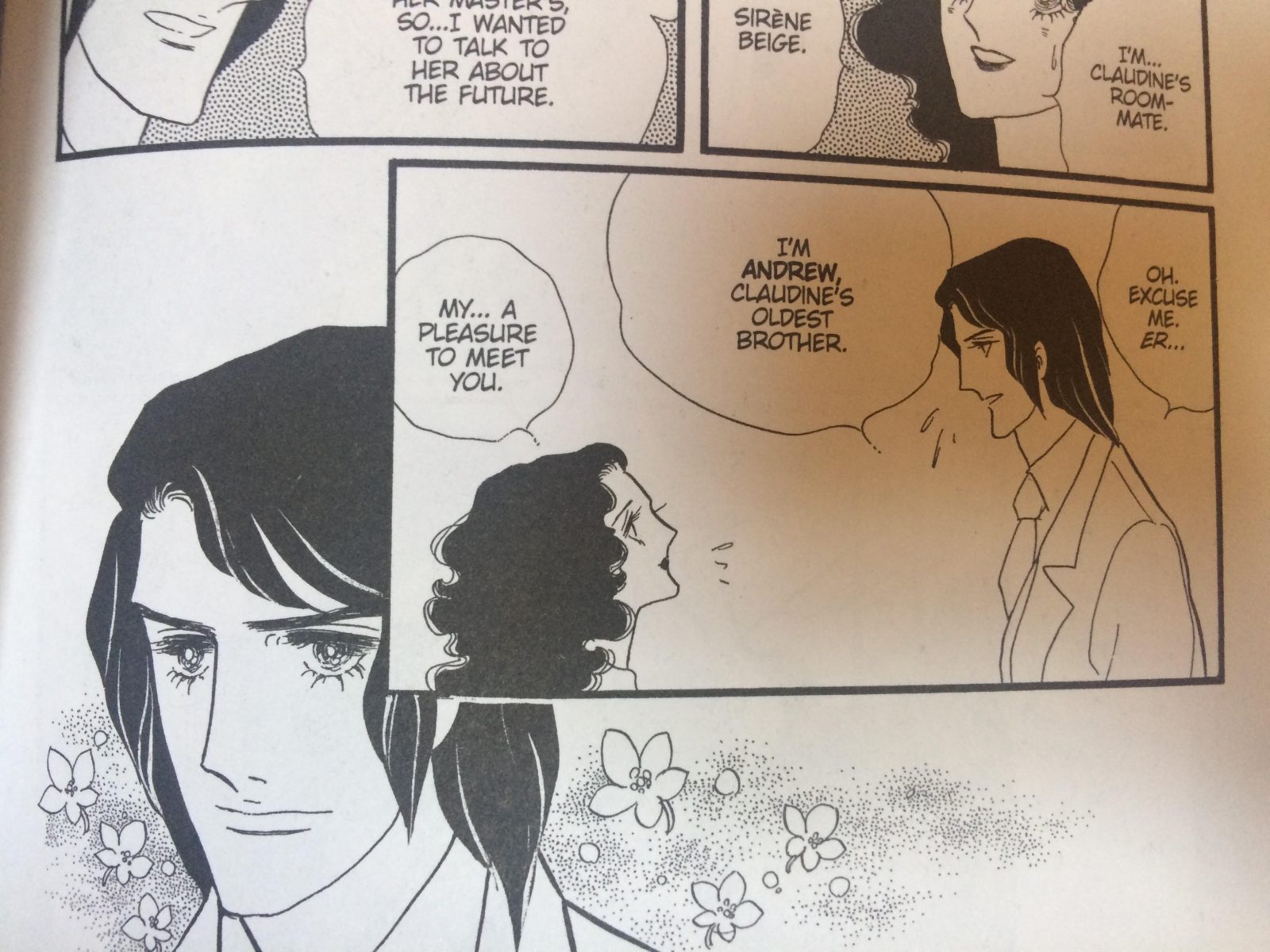 However, perhaps one could argue that Claudine’s fatal flaw wasn’t the status of his genitals, but it is Claudine’s toxic masculinity that is his fatal flaw. Claudine is quite comfortable with being sexually aggressive towards Cecilia and Sirène. In fact, Claudine ignores Sirène’s repeated assertions that she would prefer to be friends. So while Sirène’s betrayal could be seen as cold, it could also be read as someone who finally left a relationship that didn’t meet their sexual needs. From Maura to Sirène, Claudine keeps going after women who are just out of his reach. However, there is one person in Claudine’s life who completely accepts Claudine for who he is.

Claudine’s childhood friend, Rosemarie, completely accepts that Claudine is a man. Unfortunately, Claudine rejects Rosemarie’s feelings and advances. Does Claudine need to accept Rosemarie just because she accepts Claudine? Obviously not. But sometimes I wonder if part of Claudine’s rejection of Rosemarie is because she pursues Claudine and not the other way around. Rosemarie doesn’t occupy a passive female role despite upholding other traditional feminine traits. Perhaps at the end of the day, Claudine cannot accept that passive role which tragically prevents him from achieving true happiness.

While the story of Claudine may not be for everyone, in combination with other trans stories, it definitely provides a rich launching pad to discuss trans issues in a poignant and emotional way.

Next post: The Greatest Attack Name of All Time: Star Gentle Uterus