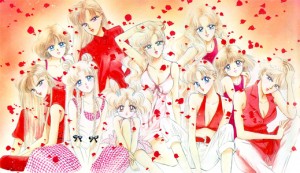 Editor’s Note1: This is Shojo Power’s first guest post EVAR! And the honor of this first post goes to the creator of missdream.org, Elly Winters.

Editor’s Note2: Since this is a post about menstruation, I want to take a moment to remember that not all women and girls menstruate. Some men have periods as well. Shojo Power! welcomes these perspectives and experiences.

“Sailor Moon” chronicles the transformation of a clumsy 14 year old crybaby named Usagi into a soldier of love and justice. Along the way Sailor Moon meets four other girls her own age who also undergo the same journey to become sailor soldiers for their respective guardian planets; Sailor Mercury, Sailor Mars, Sailor Jupiter, and Sailor Venus. Later, Usagi meets other girls going through a similar transformation – Sailor Saturn, who is around 12 years old, Sailors Uranus and Neptune, who are thought to be between 17 and 18 years old, and Sailor Pluto, who is a university student in her late teens / early 20s. An array of teenaged girls, all of whom fall somewhere along the spectrum of when girls begin to become women…

While the series “Sailor Moon” focuses on the trials and tribulations of girls transforming into magical warriors of justice, another transformation is quietly happening in the lives of each of the characters. The lack of any mention of this physical transformation in a show dedicated to female empowerment and development is puzzling; how can a show like Sailor Moon, which focuses on a team of girls going through puberty, totally ignore the facts of menstruation?

Many feminists will be quick to point out that most of the Sailor Moon series is drawn and animated with the intention of satisfying the male gaze. And the truth is that most men do not find menstruation sexually titillating. Removing all discussion of the facts of female puberty from Sailor Moon makes the series more palatable for men who are into it for the pretty girls and panty shots, and for parents who may find discussion of menstruation with their young daughters uncomfortable.

But this is still somewhat of a contraction. The creator of Sailor Moon, Naoko Takeuchi, has been unusually public with her personal experiences in menstruation, miscarriage, and child birth. She has a history of being adamantly against changing aspects of the Sailor Moon meta-series to make it more palatable to a male audience. During an interview in the September 2013 issue of ROLa magazine, Naoko Takeuchi spoke extensively about how many of the older male editors in charge at Nakayoshi tried to have her change Sailor Moon so it would “fit in” with other stories in the same genre. In 1990s Japan, Naoko’s refusal to make her female characters stereotypes wasn’t just unheard of; it was revolutionary. Her insistence to create empowered, feminine and beautiful, but ultimately non-traditional characters opened a gateway for other artists to create more varied and in-depth female characters in their own series.

By her own admission, Naoko Takeuchi has a tendency to write herself into her own stories. In Sailor Moon, Usagi’s parents and younger brother share the same names as Naoko Takeuchi’s parents and younger brother. Usagi’s journey into adulthood parallels Naoko’s, and Usagi’s transformation into a magical girl is resonant of Naoko’s transformation into a professional manga author, despite her background as a daydreaming pharmacist and amateur artist.

Given Naoko Takeuchi’s refusal to have her characters conform to the whims of men, and her unusual frankness about her own body, why does Sailor Moon lack discussion of female puberty? We know that Usagi, the series protagonist, has a daughter – a fact that is introduced into the story line fairly early on. Yet no mention is made of Usagi’s experience with puberty, which is especially strange since Usagi is portrayed as accident prone and indiscrete. There is no mention of her pregnancy, and no mention of Usagi’s experience with child birth – all of which Naoko Takeuchi writes about openly and in great detail in her “Punch” series in Young You magazine. 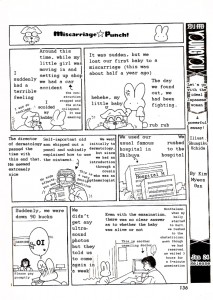 Another quiet contradiction I’ve noticed about the lack of mention of menstruation in Sailor Moon has to do with the format in which it was originally published. Sailor Moon was serialized in “Nakayoshi” magazine, which are a Japanese monthly phone book – roughly 500 pages long – featuring popular girl’s comics. Most of the “big name” girl’s comic series began in Nakayoshi, including Miracle Girls, Saint Tail, Magic Knight Rayearth, Card Captor Sakura, and many others. Along with the manga chapters, Nakayoshi magazine also contains lots of advertisements – for everything from school supplies, sticker sets, toy diaries, clothing, and more, aimed mainly at the elementary school set (ages 8-13 years old).

Most notably, Nakayoshi magazine almost invariably features an ad for sanitary napkins on its back cover. This ad usually includes an educational blurb explaining what a period is, why you shouldn’t be alarmed if you notice blood in your panties, and how to generally manage menstruation. Then it has an advertisement for a popular Japanese company that manufactures sanitary napkins – similar to what you’d find inside of boxes of “Always” or “Kotex” pads, which explains how to use the product. This advertisement always features a female cartoon character with whom the audience is meant to identify. So, we know that the girls who read Nakayoshi are familiar with the ad on the back of the volume; it’s almost a running feature. The intended audience for Sailor Moon is young girls experiencing the early stages of puberty. The discrepancy between the reality that the girls reading Sailor Moon are expecting to adjust to, and the “realities” of the girls in Sailor Moon are quite striking. 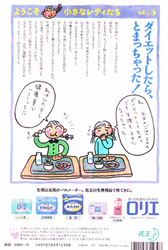 Advertisement for Laurier Sanitary Napkins from the back cover of the December 1991 Issue of Nakayoshi Magazine.

Sailor Moon overall does a great job of empowering women; it gives us a variety of examples of womanhood, all of whom are worthy and admired in their own right. The show taught many girls that it is okay to want a traditional role; Usagi is the protagonist of the show, and although she is strong and competent, she chooses to become a mother and wife. Sailor Moon teaches us that it is okay to be a career woman; you can be like Sailor Mercury and become a doctor, and that is still beautiful and feminine and worthy of respect. You can choose to devote yourself to spirituality like Sailor Mars. You can be strong and tomboyish and still maintain a soft, nurturing side like Sailor Jupiter. You can be bubbly and whimsical like Sailor Venus, but still be a leader and someone to be taken seriously. You can be a female who functions outside gender norms – you can be a lesbian or a trans-woman and still be valued and admired by your peers. More than anything, Sailor Moon showcases women as complex human beings. Their purpose is not to be a side kick, subordinate or ornament to a man. Women are shown as full people in their own right, all of whom are deserving of respect and dignity, and that is why Sailor Moon as a series is vitally important as a source of positive female role models. 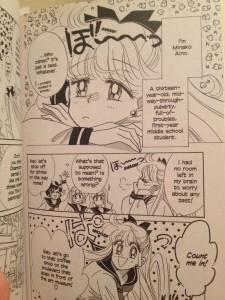 In Kodansha’s translation, the word “puberty” is used just once in chapter 8 of volume one of Sailor V.

As women and girls, I think it is important for us to take notice when media intended for our consumption whitewashes the facts of biology. In this area Sailor Moon falls short. If Sailor Moon had detailed the experiences of teenaged girls undergoing puberty, or the realities of pregnancy and childbirth as experienced by Usagi, I think that would have been of great value. It could have helped relieve some of the stigma surrounding the female body, which is especially prevalent even in series intended for women. Please share your thoughts on issues of female biology as reflected in Sailor Moon in the comments below – I am curious to hear your thoughts on this subject. Thank you for reading!