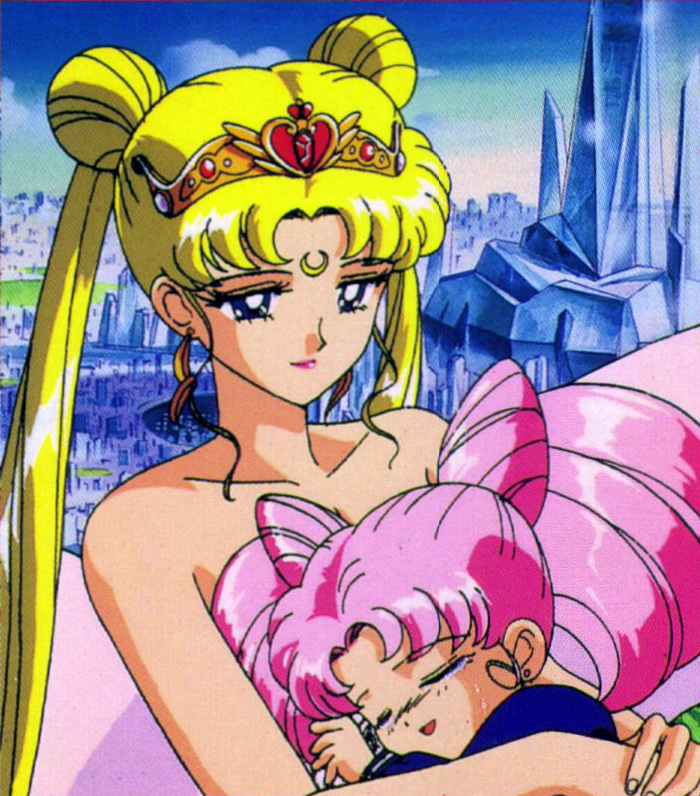 In January 2017, the Sailor Moon R movie played in movie theaters across the United States. I was ecstatic that I was finally going to be able to see Sailor Moon in theaters for the first time. It had been quite some time since I had seen the Sailor Moon R movie–I think the last time was when it appeared on Toonami. Of course, the movie was as exciting and entertaining just as I had remembered, however, there was one scene that completely surprised me.

During the final battle, Chibiusa, who is safely sitting on a rooftop with Luna and Artemis, tells them, “It’ll be okay, Sailor Moon is everyone’s mom!”

Sailor Moon being everyone’s mom is pretty much the last thing I would say to describe Sailor Moon. In fact, throughout the second season of Sailor Moon, Chibiusa struggles to accept that Usagi is indeed her mother’s younger self. Usagi is the complete opposite of her mother–she’s childlike, self-centered, klutzy and a bit of a crybaby. Usagi and Chibiusa act more like sisters rather than mother and daughter.

I wasn’t the only one who was struck by this scene. The blog Tuxedo Unmasked, dug up an old interview with the movie’s director, Kunihiko Ikuhara that explains the theme of motherhood in the movie:

According to director Ikuhara, this movie contrasts the relationship between Xenian and Fiore with that between Usagi Tsukino and the Sailor Team; i.e., contrasting Xenian’s brand of “motherhood” of using [Fiore] for her own gain with Usagi’s “motherhood” with which she unconsciously supports everyone else. [Translation, Tuxedo Unmasked]

Personally, I think supporting your friends isn’t particularly “motherly”–I just call that being a good friend. However, the question remains–in a season where Usagi is definitely not portrayed as a mother to Chibiusa, why was there a need for Chibiusa to connect Sailor Moon’s role with motherhood?

I found myself confronting this question yet again, but this time, it was in the form of a dissertation. In 2011, Japanese feminist and scholar, Akiko Sugawa-Shimada published her dissertation on magical girl anime and Japanese audience reactions. It’s written in English and available to read for free.

In the dissertation, Sugawa-Shimada surveys several magical girl anime from Sally the Witch, to Creamy Mami as well as Sailor Moon. In a lot of ways, Sailor Moon was a culmination of various magical girl tropes that had developed since the genre began in 1966. Beginning with elementary school protagonists in the 60s, the genre not only contained magical transformations, but eventually sexual transformations as well. In Creamy Mami, for example, the grade school protagonist Yu transforms into a sexier, older version of herself so she can perform as an idol. So, in some ways, it makes sense that in the second season of Sailor Moon, our magical girl heroine confronts the far future where her identity and role has transformed yet again–this time into a wife and mother. And from what I can gather, Sailor Moon, is one of the few, if not only, magical girls is who also a biological mother.

Sugawa-Shimada is particularly interested in this representation of motherhood in Sailor Moon. She explains that for many average women in Japan, their participation in politics often revolves around their identity as mothers and the protection of children. (Sugawa-Shimada, Page 103). She also speculates that positioning Sailor Moon as a mother was a move to portray the series’ female empowerment themes as non-threatening to Japanese society. In the early 90s, several events shook Japan:

In 1990, Japan’s birth rate dropped to 1.57, which was sensationally reported as ‘the 1.57 shock’ in mass media.Women who had not experienced childbirth were often publicly blamed for the low birth rate.In 1995, the Great Hanshin Earthquake and the terrorist attack by a cult group in Tokyo brought social anxiety and instability. [Sugawa-Shimada, Page 106]

Moreover, this was the time the economic bubble of the 80s burst, and the Japanese economy went into a recession. Young women were seen as a bright hope for the Japanese economy–but the expectation for marriage and babies was still there. (Sugawa-Shimada, Page 185)

It’s surprising to me that those involved with the anime felt the need to connect Sailor Moon’s superhero status to motherhood–after all, we know Sailor Moon goes on to marry Tuxedo Mask and have a child. What more do you need? Well, maybe a bit more considering what happens in the manga.

As I’ve written about previously, the concept of shōjo is the time period between puberty and marriage. In the Sailor Moon universe, we know that Usagi can no longer transform into Sailor Moon once she gets married and births Chibiusa. But what about the other sailor guardians? What does their future hold? In the manga, we see the guardians in their sailor uniforms. I think this strongly implies they are not married and they do not have children. 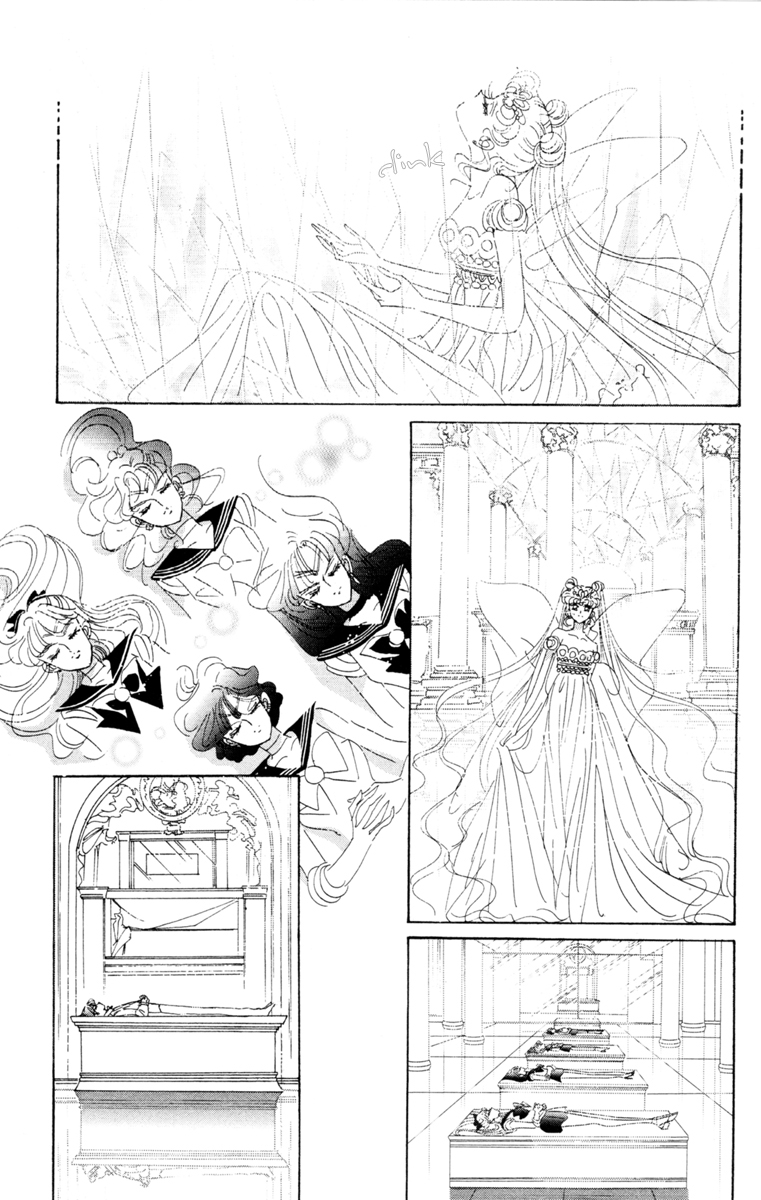 Naoko Takeuchi seems to be pretty emphatic on this point–that outside of Usagi, none of the sailor guardians get married and have children. And the one short story where the sailor guardians are married and have children, it’s not canon. In Parallel Sailor Moon, we see the inner guardians discuss their stressful, but happy lives as parents, wives and employees. Written in 1999 after both the manga and anime ended, this story seems to bring a bit of cold-hard reality to the Sailor Moon universe.

In Sugawa-Shimada’s disseration, she interviews a group of Japanese school girls who grew up watching Sailor Moon. She was very curious to know their thoughts and feelings about motherhood and the male love interests. However, neither motherhood nor Tuxedo Mask seem to stick out to them. The girls were much more interested in the sailor guardians (particularly Makoto aka Sailor Jupiter). Like Usagi, who gathered a group of friends to protect the world, the girls made teams of their own friends. (Sugawa-Shimada, Page 277)

What about you? Do you think Sailor Moon is like a mother to everyone? Did Sailor Moon’s identity as a mother make an impression on you?

Next post: The Top Ten Most Epic Deaths in Sailor Moon

Previous post: The Sailor Moon Manga Act I Hate the Most