According to an interview she did at AnimeFest 2012, she was working on Samurai Champloo when the President of Manglobe asked her to create a new TV series with complete creative control after she was done with Samurai Champloo. After going on a trip to Brazil with her friends to deal with personal issues, she was inspired by the people and the culture there to create Michiko to Hatchin. Shinchiro Watanabe was also involved in her project as co-producer and music producer. In short, big names in the anime industry were involved in getting Sayo Yamamoto’s name to become well known.

The story of Michiko to Hatchin is about Michiko Malandro saving Hana Morenos (later nicknamed “Hatchin”) from her abusive foster family and sets out on a journey to find Hatchin biological father and Michiko’s ex-lover Hiroshi Morenos. This series is episodic following Michiko and Hatchin as they explore each town they visit through a fictional setting of Brazil in South America and the Caribbean. Throughout the series our heroes meet various people that live in different social classes, but primarily we explore the socio-economic dynamic of the people living in the slums and the lengths people go through in order to survive. The world that Michiko to Hatchin throws us into is not kind and it does not apologize for how cruel it can be to its inhabitants. The most telling example is how limited options are available for youth and children living in poverty. They have no choice but to work for either gangs or within a corrupt employment system. The people that work within these systems are morally ambiguous, but despite their actions, they maintain a sense of community with each other that helps them survive the unfairness of the world. 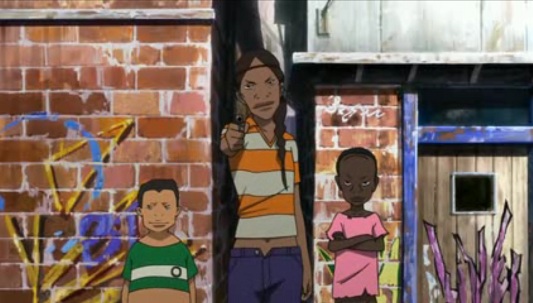 As a person of Latin American ancestry, I am amazed of how much research Sayo Yamamoto did for Michiko to Hatchin in regards to capturing the socio-cultural dynamics of her fictional Brazil. She was also able to capture the nuances of how Shadism or in this case “Mejorar La Raza” (Improving the Race) works in creating complex racial categories in Latin America and the Caribbean. It is difficult to discuss the complexity of racial categories because the history of colonization happened differently depending on each country within Latin America and the Caribbean. As a result, even though Latinxs experience marginalization, it does not erase systemic white privilege that has been internalized into our communities throughout years of policies aimed to Blanqueamiento (biologically whitening our people). There are several instances where we see this relationship examined in Michiko to Hatchin, but there are two instances I want to discuss in order to highlight how internalized this mindset is within our communities.

In episodes 5 and 6, we learn that the orphanage where Michiko and Asuko grew up is involved in child trafficking. However, the orphanage director Zelia Bastos only sells the white children and keeps the brown and black children at her institute. We later learn in episode 11–through a child trafficker also named Michiko–that white children sell for a higher price than brown and black children. It is literally disturbing seeing this other Michiko fawn over how beautifully white Hatchin’s skin is while completely ignoring the other children of color. Obviously child trafficking is absolutely awful, but the way this business is carried out reflects the mentality of white supremacy.

The orphanage director Zelia Bastos is fucked up, but what is interesting about her is that she uses the money to keep the orphanage operating and continues to raise the children of color in her care. She knows the children hate her, but she also knows they have limited opportunities to succeed in this world. Regardless of the fact that the children hate her, Zelia Bastos at least offers them the opportunity to decide their own fates. There are several characters like Zelia Bastos that are morally ambiguous in Michiko to Hatchin, but they are not archetypal villains–instead they are people trying to survive a cruel system while also finding ways to fight back.

Michiko to Hatchin has large cast of characters, but in order to avoid more spoilers I will focus on the Queen herself Michiko. In the beginning of the series, Hatchin dreams of her father rescuing her from her abusive foster family, but instead, Michiko rolls up with her motorcycle breaking through a window to find and rescue Hatchin. Immediately Michiko establishes that we are our own heroes that we have been waiting for to save the day and further empowers us to seek self-determination. Despite her badassery, Michiko reveals her vulnerabilities through sharing her idealist dreams of creating a family with both Hatchin and Hiroshi.

The theme of loneliness and dreaming resonates throughout series since there are plenty of characters that are stuck in hopeless situations, but their circumstances never stop them from dreaming of a better reality. Even if there are some dreams that are useless, it does not stop people like Michiko from fighting to achieve a semblance of that ideal world into their lives. Even though Michiko dreams are seen as lost cause, her community continues to mobilize to help her along the way in her journey so that she can find closure for both herself and Hatchin.

Ultimately, Michiko to Hatchin is a colorful series that chronicles the human struggles of people trying to find happiness. Despite the obvious systemic oppression that underlines the struggles of our heroes, the true strength of the series is when everyone shares their stories and tries to help each other out in their own respective journeys. It is the perfect series to sit back and enjoy the casual atmosphere after a long day at work.  On a final note, I want to dedicate this article to the hashtag #BlackLatinxHistory that was started by Juliana Pache in order to celebrate the achievements and the continuous work of Black Latinxs. Please check out the various links I embedded in this article for more information about the various topics I discussed.

Previous post: The Puppet Master Has Arrived: A Ghost in the Shell (2017) Review