This episode begins with Usagi getting out of the tub and stepping on a scale. She screams, shocked that she has gained some weight. Thus begins Usagi’s determination to find a way to lose weight throughout the episode.

A Tale of Two Families 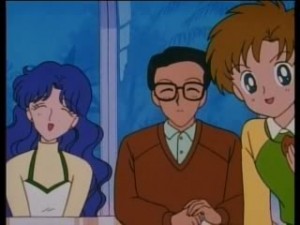 After our hero’s discovery, she goes to talk to her mom and dad. Here, we have the first big change of the episode–in the VIZ sub, Usagi’s dad consoles her by saying a little weight is good when you are young. Her parents say that Usagi should exercise, but she does eat more than she studies. However, in the DIC dub, her whole family denies that she needs to lose weight–even her brother Sammy! Serena’s mom declares that not eating is unhealthy. They come across as much more supportive than in the sub, but it leaves Serena acting “irrational.” Usagi’s family is not as sympathetic, but they do seem to take her concern seriously.

This scene illuminates two issues about how our cultures talk about weight. People like to compare obesity with smoking, but as Serena’s mom points out, gaining weight can’t simply be solved by not eating (as opposed to simply not smoking). In contrast, Usagi’s mom focuses on Usagi’s eating. Overeating is not the only culprit when it comes to weight gain. Illness, medication, increased muscle mass, and poverty are all factors that can contribute to weight gain. I wish our TV shows would tackle these issues, but I imagine they don’t because they are socially awkward conversations; it’s much easier to blame eating or a person’s moral failing.

Luna is a Jerk 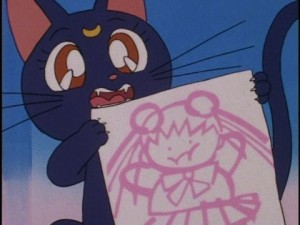 Holy crap! Luna is such a bitch in this episode! Luna is like that family member/friend/stranger who thinks fat shaming is going to magically make people thinner. Turns out that doesn’t work! The DIC dub makes a herculean effort to curtail Luna’s fat shaming of Serena, but the above drawing is still in the episode. In the sub, Luna draws a picture of a fat Sailor Moon saying this will be Usagi in 6 months. In the DIC dub, Serena asks what Luna is drawing and Luna says it’s her favorite hero. Serena is not amused.

Later, after Motoki tells Usagi he likes girls who aren’t skin and bones, Luna fat shames Usagi AGAIN by telling her that Motoki likes chubby girls, not fat girls. This causes Usagi to run back to the gym. DIC dub Luna tells Serena to quite eating so many doughnuts, but she also says Serena is not fat and has more important things to worry about–like defeating the Negaverse. I couldn’t agree more!

The True Hero of the Episode 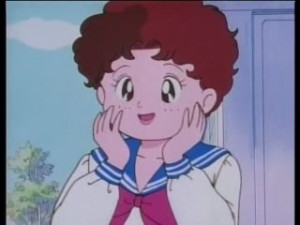 So, after Usagi/Serena speaks to her family, she commiserates with her friends at school. And this girl. This girl right here is my favorite part of this episode. Her face is drawn rounder than the others. I’m guessing we’re meant to see her as the fat girl of the group. In the sub, she says losing weight is tough. Which elicits this awkward reaction: 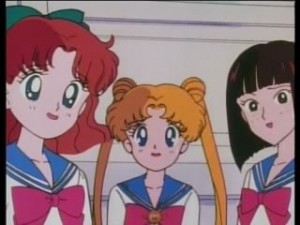 …as if a chubby girl can’t have opinions on what it’s like to gain or lose weight. She ends up getting in a fight with the black haired girl because she calls bullshit on her out on her method of losing weight (being in love). The DIC dub takes it a step further and makes this girl a venerable fountain of body positivity! She says her parents don’t allow her to go on diets, that you can’t stop eating and you need to stop eating junk food.

The Awfulness of Before and After Photos

Ah. This scene brings back memories! After I graduated college, I worked in Japan as an English teacher. Living there really changed how I thought about food and weight. I would see diet advertisements featuring before and after photos exactly like Ms. Haruna’s. I was shocked—these Japanese “before” photos looks like American “after” photos! It made me realize that “being thin” is arbitrary–sometimes you are only thin as the thinnest person in the room. In other words, there’s no magical weight when people are going to stop obsessing about weight. Your personal goals and happiness are more than others’ arbitrary opinions. Thankfully in the DIC dub, they’re just photos and not before and after photos.

Finding Self-Esteem in the Wrong Places 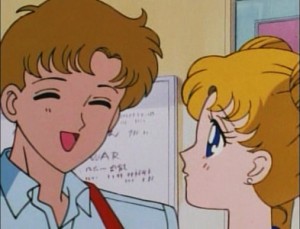 After fainting into Motoki’s arms, Usagi learns that Motoki prefers girls with some extra weight, not girls who are skin and bones. This makes Usagi very happy. In the DIC dub, Andrew admits he wants to be a doctor and that it’s important for Serena to eat.  I can understand why the DIC dub changed this conversation. In the subtitled version, it’s a scene that shows us our heroine is still immature–her self-esteem depends on her crush’s opinion rather than herself. It also reflects the dilemma many girls (and boys) find themselves–whether you weigh too much or too little, your weight is a public matter.

Loving Your Body by Moonlight 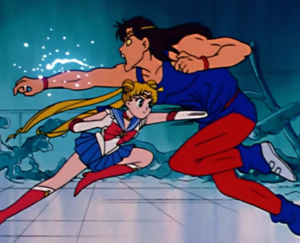 Sailor Moon finally confronts the bad guys who have been sapping energy from the young women at the gym. Except our heroine is still a scaredy cat and runs away. In the sub, Luna finally convinces Sailor Moon to fight by telling her that she’ll lose weight if she fights. Embolden by this, Sailor Moon punches and kicks, sweating her way to beauty. The DIC dub drops this dialogue and replaces it with Luna reminding Sailor Moon that she needs to save Ms. H (making Serena more noble than Usagi). While the original dialogue could be tweaked (maybe if she fights, she’ll get fit?), it occurred to me that becoming a hero actually helps Usagi love her body and herself. 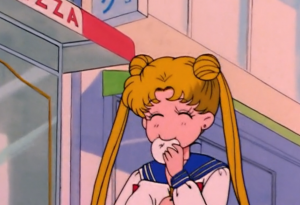 In conclusion, a girl of average weight can watch this episode and feel better about herself–but at the expense of fat girls. VIZ has probably finished the redub of this episode and I look forward to see how they handle it. If I were making the decisions, I would probably make a few adjustments like dropping the “before/after” photos and Luna’s reminder that Motoki doesn’t like fat girls. But what I’m definitely looking forward to are the “doughnuts” being referred to as “pork buns.” In 1995, when this episode first aired, 11 year old me had never eaten a pork bun. As a white girl living in the Midwest, I had no idea what they even were. Fast forward to 2014, and I have eaten plenty of pork buns. And, like Usagi, I think we should all treat ourselves by having a few in celebration!

Vowed I was not getting a safety razor but surpris

Biked to Bryant Park today to meet up with my frie