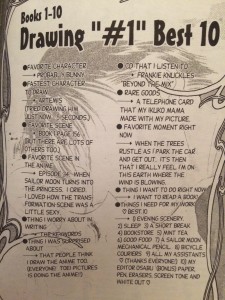 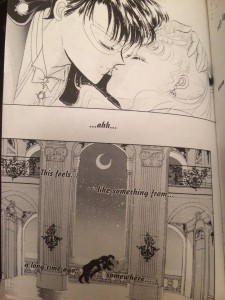 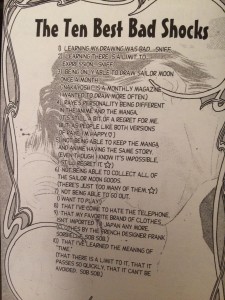 1) Learning my drawing was bad…sniff

2) Learning there is a limit to expression…sniff

3) Being only able to draw Sailor Moon once a month (Nakayoshi is a monthly magazine I wanted to draw more often.)

4) Raye’s [Editor’s Note: Rei] personality being different in the anime and the manga. (It’s still a bit of a regret for me. But, as people like both versions of Raye, I’m happy. <3)

5) Not being able to keep the manga and anime having the same story. (Even though I know it’s impossible, I still regret it.)

6) Not being able to collect all of the Sailor Moon goods. (There’s just too many of them.)

8) That I’ve come to hate the telephone.

9) That my favorite brand of clothes isn’t imported to Japan any more. (Clothes by the French designer Frank Sorbielle, sob sob.)

10) That I’ve learned the meaning of “time.” (That there is a limit to it, that it passes so quickly, that it can’t be avoided. sob sob.) 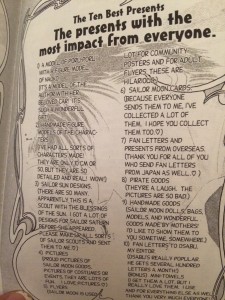 1) Being animated. (I’m so happy to see the anime each week.)

2) Being made into a movie and a musical.

4) Receiving so many fan letters. (Thank you so much everyone. <3)

5) Sailor Moon spreading out in the world. (Recently the manga has been released in French. Apparently, it’s going to be released in America soon too.)

6) Winning the Kodansha manga prize. (It seems too good to be true. I always dreamed of it.)

10) Would you believe that with the 10th book of Sailor Moon, I now have 20 books published?! It’s wonderful!

(Bonus) This year, spring ’95, Sailor Moon had an internet home page set up. This could be a big scoop! There’s a corner for me too! I want to surf the internet. 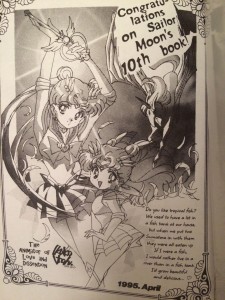