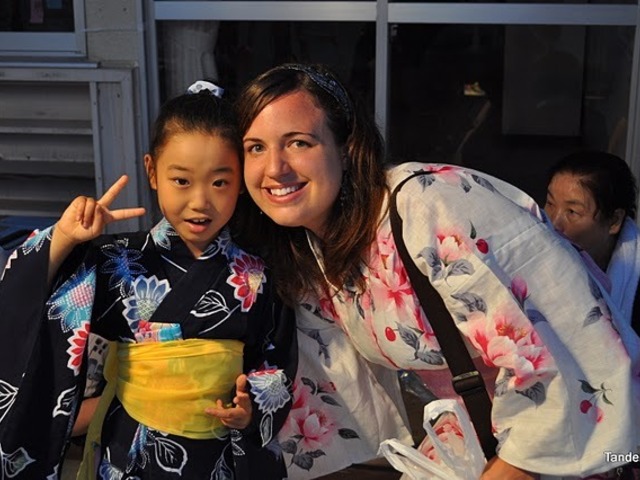 Back in March 2011, Japan and the world were reeling from the effects of the Great Earthquake and Tsunami that killed over 18,000 people and obliterated the Tohoku coastline. The Nightly News with Brian Williams reported the death of Taylor Anderson, a young white American woman who had been teaching English in the area. Her smiling face with her bright pink yukata filled my TV screen. After the broadcast ended, my phone immediately rang.

It was my Mom.

The story had hit home–I had taught English myself near Kyoto right out of college from 2006 to 2008. Here it was, my parents’ worst nightmare, on their TV screen. So when I heard that a documentary called “Live Your Dream: The Taylor Anderson Story” was screening in New York City, I knew I had to show my support.

Live Your Dream: The Taylor Anderson Story begins with Taylor’s childhood. Her interest in Japan started in her early childhood with a local Japanese language program (I’m so jealous!). After college she applied to JET and after being put on the wait-list, was accepted into the program. The documentary follows her ups and downs with living and teaching in Japan with interviews with friends, family, and students. I was struck by how full of life she was–I would have loved to be her friend! However, this film wasn’t just about Taylor. Another American, Monty Dickson, had perished in the tsunami as well.

I cried pretty much during the whole movie–but some moments were particularly overwhelming. We learn how when Monty “grows up,” he wants to be a bridge between cultures. We learn about Endō Shin’ichi who is a carpenter and honors Taylor’s memory by creating bookshelves for the schools where Taylor taught. We also learn that all three of his young children, who were Taylor’s students, perished during the tsunami.

After the film, the director, Regge Life, took to the stage to answer questions about the making of the film. Since Live Your Dream has been screened in Japan as well, one person asked about the Japanese reactions to the film. Mr. Life explained that many Japanese were moved by Endō Shin’ichi’s story. He also revealed that many Japanese were shocked by some of the earthquake and tsunami footage. NHK has strict rules about airing people’s faces so some of the footage has never been shown before on Japanese TV. A filmgoer asked about what wasn’t in the film–were there any interesting bits that were left on the cutting room floor? The director said that everything he wanted was in the film. However, there were some things that the film couldn’t explore. For example, one of Taylor’s friends had a difficult time healing from the disaster. By participating in the film, she was able start the healing process. The director also wanted to include more about Monty, but so many of his friends, colleagues and students had not survived the tsunami.

I hope this documentary inspires both Japanese and Americans to live their dreams–specifically if they would like to visit/live/work abroad. When I told my parents that I was going to live and work in Japan, they were none too happy. They were incredibly concerned about my safety. At one point, I became very frustrated with my Dad and asked him–“You wouldn’t have a problem with me moving to Florida. How is that different?” And my Dad replied, “I can’t get to Japan in 2 hours.” Point taken.

As a English teacher in Japan, I often encouraged my students to travel abroad. Several of my students would tell me that they wanted to go to Canada. Of course, my national pride welled up within me–why not go to America? “Too dangerous,” they would tell me. I was shocked, but the idea that America is a dangerous place is not unusual–see Hana Yori Dango or Hana Kimi. I wonder if this movie will change any Japanese opinions about traveling abroad.

Taylor’s family has set up a memorial fund in her memory which you can read more about here and here. The movie is not available yet online, but if that changes, I’ll let you guys know. You can purchase a copy here and check for local screenings here.