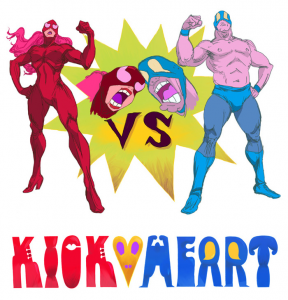 At Japan Cuts 2013, this animated short, Kick Heart, played just before the AKB48 documentary. Kick Heart is brought to us by Production I.G who has been behind works as such as Ghost in the Shell, FLCL and many others. What’s notable about this project is that it began as a Kickstarter project in October 2012. They explained their rationale for using Kickstarter as such:

Recently in Japan, its been very difficult for the next generation of innovators to create more artistically driven projects– mainly because of the economic situation in Japan. Most of the focus has been put on creating projects that carry less risk– such as remakes of older animation projects or well-known established properties.

So we had an idea: What if we use Kickstarter as a platform to connect the fans across the globe who want to see cutting-edge animation, with highly skilled anime directors? By using crowdfunding to help support and promote these talented directors, we can enable them to push the boundaries of anime to inspire others to innovate alongside them.

This is a bit of an experiment for us, and we are trying to see if is possible to make these types of artistically driven films with the help of crowd-funding. If this goes well, we would definitely like to pursue more projects like this in the future.

The project seems to be a success–they were able to raise $50K over their original goal. That means Kick Heart will get an English dub with the help of Richard Epcar, the English dub voice of Batou from the Ghost in the Shell Films/Series. I encourage you to check out their Kickstarter page–it’s quite extensive with production designs, video and interviews.

KICK HEART is about a wrestler, Romeo, who falls in love with a female wrestler, Lady S, who promptly kicks his butt in the ring. He loves every minute of it so much, hearts fly out of his chest every time she lands a punch. I was a little leery about this whole concept, but I knew any anime called KICK HEART might bring something different to the table.

When we first see Romeo, or Masked Man M, he’s fighting the female wrestler, Vacuum Fat, which is perfect example of how fat women are stigmatized and mocked. This could have been a great opportunity to show how strong and useful her fat body is, but it’s not. Vacuum Fat just stands there while M punches her belly–she stands immobile, towering over him. He eventually gets sucked into the folds of her fat where he finds a skeleton. Just hanging, as a skeleton does. Her fat literally kills people. Her fatness is also used as a joke when M eagerly awaits for Lady S to enter the ring, only to be visibly disappointed when Vacuum Fat enters instead. Lady S, on the other hand, is thin–as you can see from the picture above. I was happy, however, to see that she was very muscular.

All and all, I hope that this project has inspired anime producers and directors to create more creative and innovative works via Kickstarter. You can check for updates on screenings of KICK HEART on their Facebook page or Kickstarter.