Usually Otakon is my go-to con, but after my friends kept raving about Anime Boston, I decided to switch it up a bit and try it out this year.

Me and my Better Half left Friday morning on Amtrak. We love traveling by train! 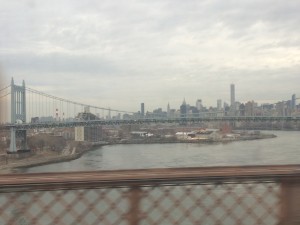 After arriving at Back Bay station, we grabbed a bite to eat at The Salty Pig. It totally hit the spot! (Despite the fact it was Good Friday, oops!) After dropping off our bags at our hostel, we headed to the convention center.

I had been to the Hynes convention center before, so I knew it was in the middle of a shopping center, but it had been awhile. I was a bit confused as to where the entrance was, but there were several signs. Getting into the convention center was a bit of a hassle since security had to open all bags. The process was speedy, and obviously it was understandable considering the recent Boston Marathon bombing.

Finally in the convention center, I checked into Panel Ops and it was off to find the 5th floor of the Sheraton—the new “Foundations of Anime” area. It was bit off the beaten path, but I was able to find it easily. There, I would be doing my first panel of the weekend, Gaijin Girl: Life in Japan. I’m really glad Anime Boston has 30 minute buffer between panels–I showed up a half an hour early and used most of that time fixing tech problems. Thank you tech staff for not giving up when we had no idea what was wrong! 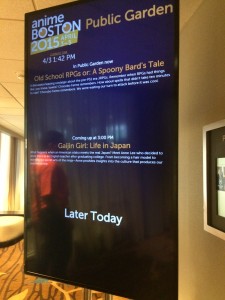 The crowd was a bit sparse at the beginning of the panel, but people kept trickling in, and by the end, there was a pretty sizable crowd. The crowd was great and asked good questions–thanks everyone!

After that, we decided to peruse the Artist Alley. I made a beeline for the Sparkler booth to buy a copy of The Princess of Tennis. I gushed over the adorable geeky dress up dresses at Ella Dresses. I wish I had a little girl to dress up! Then I spotted a waaaaay awesome Sailor Moon skirt at the radtastical booth and for some reason DIDN’T buy it and someone snapped it up before I did! GRRR!

After the Artist Alley, we made our way to the Dealers room. I always feel a bit bummed when I go to Dealers rooms these days–whereas in the past I could find these I couldn’t find anywhere else, now it’s the same old stuff that I find online and for cheaper. However, I end up buying the first volume of With the Light: Raising an Autistic Child for $5 so that was a win!

The theme of this convention was Kaiju vs. Mecha and the guest of honor was the King of Kaiju himself, Godzilla! I’m not a huge Godzilla fan, but my friend @IncanHoney is! She was able to get autographs from Akira Takarada (who played navy diver Hideto Ogata) and Haruo Nakakima (Godzilla, himself, the man in the Godzilla suit!) 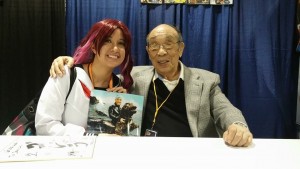 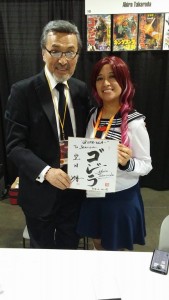 Time flies when you’re having fun! And before we embarked on the festivities for the evening, we made sure we made time to have dinner at Haru. I had their scallops with wasabi salsa–it was very unique and delicious!

Next on the agenda was the Friday night concert: LiSA! I always love going to concerts at anime conventions–you get to see acts you wouldn’t be able to see otherwise and you can discover new music too! I hadn’t heard of LiSA before, but you probably have–she’s done music for Angel Beats!, Fate Zero, Sword Art Onlineand more. And OMG! Her concert was AMAZING!!! She completely and utterly ROCKED OUT. I don’t think anyone in pop/rock today has as strong a voice as she does. She went on and on without even a crack in her voice! I was having so much, I didn’t want to leave, but alas, my Sailor Moon & Feminism panel was at 9:30pm so I had to duck out before LiSA’s encore.

Panel Ops told me that my Sailor Moon & Feminism would be PACKED. Packed?! Really!? I asked how many people the room could fit–180 people!? Well, it that was the case, I would going to have my biggest audience ever! And—-I did! 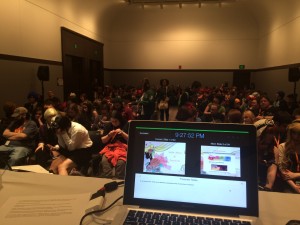 Look at all you guys!

Thank you everyone for coming out! I had tons of fun and I hope you did too! Everyone had really great comments and questions. Panel Ops told me that if anyone caused any problems to tell the tech staff immediately, but thankfully, everyone behaved themselves. After the panel, I was excited to meet meet some twitter friends, @MillieDubois and @SailorMoonSub (who if you aren’t already following, you must follow her right this minute because she is HILARIOUS.)

Saturdays are always crazy, so as usual, it was very crowded. But on the bright side of things, where there are people, there’s cosplay, right? Here are some of my favorites: 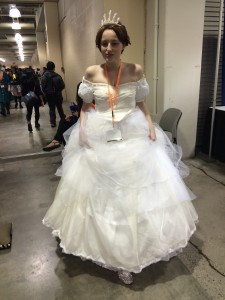 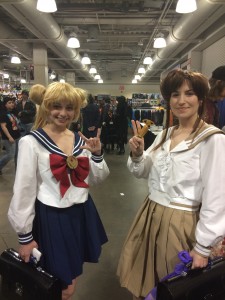 Usagi and Makoto. I love their bags! 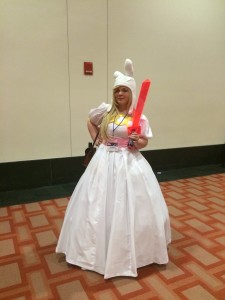 I’m all about what Princess Fiona is all about. ^_^ 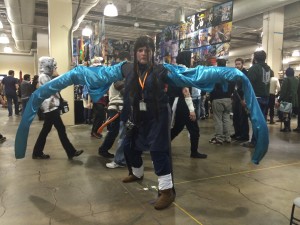 Ming-Hua from The Legend of Korra 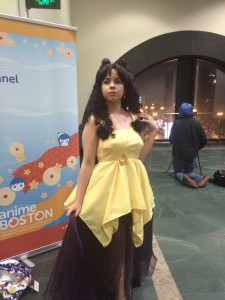 There were so many amazing Human Lunas! I wish I took a picture of them all! 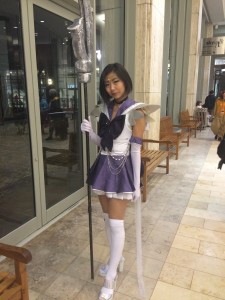 Omggg. I love this Saturn! I love her chains, the purple fabric and her white skirt! 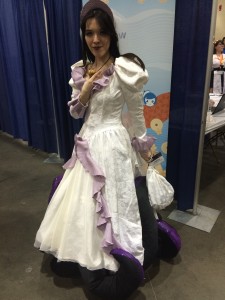 My FAVORITE cosplay of the whole weekend! It’s human Ursula with her tentacles!

My Better Half is a big Naruto fan and he mentioned that he was interested in seeing the dub premiere of the Naruto spin-off, Rock Lee and His Ninja Pals. At first, Better Half seemed unimpressed by the super-deformed, comedic show, but weeks later he’s still quoting lines from the show! “I can see by the hearts in your eyes, you totally dig me!” Lucky me, eh? LOL

As for me, I dragged Better Half and friends to an academic panel called Intro to Transnational Media where we got a little taste of the academic terms and frameworks used in this discipline. I also made time to attend the panel Fight Like a Girl: How Magical Girls Weaponized Femininity. I’ve been meaning to attend this panel like FOREVER and finally–finally–I made it! And I was not disappointed! It covers a huge range of anime and even included information on feminist interpretations of the magical girl genre from a Japanese perspective. If you get a chance to see this panel, I highly recommend it!

For lunch, we ate at Boston Chowda in the food court of the convention mall. I had some delicious clam chowder and ate a lobster roll for the first time. Better Half had a lobster bisque which was also very tasty! For dinner, we had seafood again (how can you not in Boston???), opting for Legal Seafood.

On Sunday, for the first time, I decided to skip out on the convention all together and just do some sight-seeing instead. We headed out to Newbury Street–a quiet street full of restaurants and cute shops. We stopped by The Fairy Shop and had a coffee at the Wired Puppy. Their latte art game was spot on!

Happy Easter from the Wired Puppy!

After grabbing some really great pizza at the Dirty Water Dough Company, we hauled butt to the Boston Commons Visitor Center, where we grabbed tickets to the Freedom Trail tour. The woman at the counter noticed our Anime Boston badges and remarked that this year was the first time in a long time that she didn’t volunteer at the convention.

The tour was lead by a knowledgable tour guide dressed in period clothing. We visited several important sites in a short amount of time–I hadn’t realized all these landmarks were so close together! You read about all these places, people and events in books, but it’s a whole other experience seeing it for yourself. 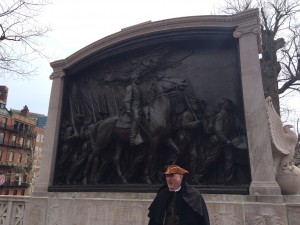 Have you seen the movie Glory? This is the famous monument dedicated to the 54th. 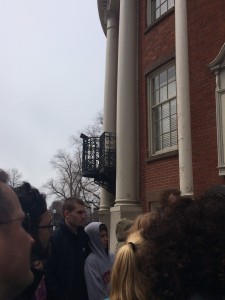 William Llyod Garrison spoke out against slavery from this balcony. 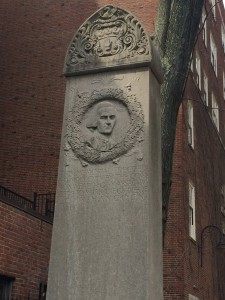 John Hancock’s tomb–his signature on the constitution is the biggest because he thought he was the only one who needed to sign it. 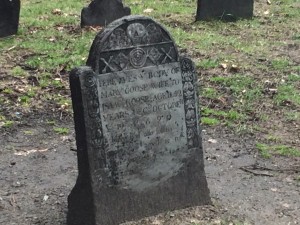 Lots of well-known people are buried in the cementary–even Mother Goose! 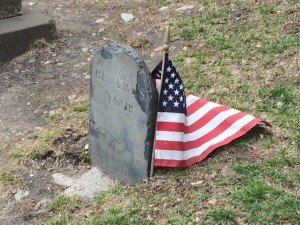 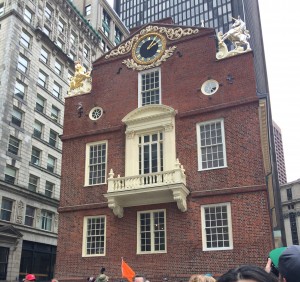 The British Parliament House where the Boston Massacre occurred.

All in all, I had a really great time at Anime Boston–I hope to do it again!

Next post: Last Boat to Yokohama: A Feminist Book Review