What is Obscenity? A Feminist Book Review 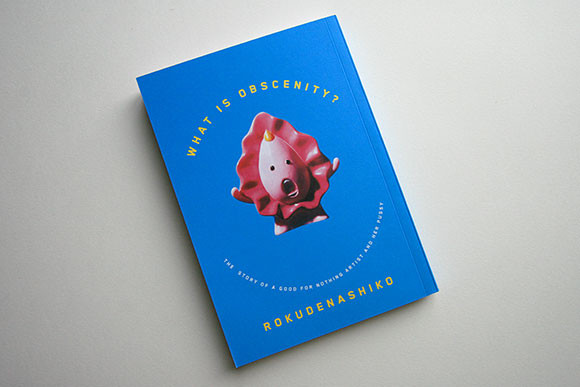 What is Obscenity? The Story of a Good for Nothing Artist and her Pussy tells the story of vagina artist, Rokudenashiko, who was arrested in 2014 for “distributing obscene materials.” What were the obscene materials? Art made from the artist’s own vagina. The arrest made headlines around the world.

Like many people, I was following this case intently. I thought I knew everything about it. However, upon reading What is Obscenity?, it’s apparent that the media only skimmed the surface. The news left out so many interesting (and depressing) details about what exactly happened.

Published in September 2015, What is Obscenity? is a collection of short comics that originally appeared in the liberal newspaper Skukan Kinyobi (Weekly Friday). In between the comics, there are short text sections which provide more information about Japanese law, the criminal justice system and Japanese media. It also includes colorful images and an interview with film director Sion Sano. The book begins with the events of Rokudenashiko’s arrest and her time spent in jail before backtracking to tell the story of how Rokudenashiko became a vagina artist.

The first thing to note about What is Obscenity? is that reads like your typical humorous manga. When the police arrive at her house to arrest her, she frantically puts on some makeup because she’s concerned about what users on 2chan might say. When she notices that the police and government officials have a hard time saying the word manko (the Japanese word for “pussy”), she intentionally writes her court statement with the word manko so that officials have to say it outloud.

However, What is Obscenity? is more than just a humorous story, every part of Rokudenashiko’s story challenges readers to ask themselves: what is obscenity? For example, the book includes pictures and information regarding the Japanese festival, Kanamara Matsuri, a festival where a giant penis float is paraded around town. This begs the reader to wonder why Rokudenashiko’s bright yellow vagina kayak attracted such ire. In fact, this issue is brought up again and again–foreign reporters remark that Japan sells fleshlights, so why is Rokudenashiko being targeted?

Rokudenashiko’s lawyers explain that Japan’s obscenity laws are rather vague. Article 175, the article which Rodenashiko was charged under, says that obscenity is “anything illiciting sexual desire, excitement or arousal in vain, or that violates a reasonable person’s sense of propriety, or principles of righteous and moral sexuality.” This law would seemingly ban quite a bit of content in Japan from anime and manga to your average magazine sold in a grocery store.

Rokudenashiko’s surmises that she was targeted for two reasons: one, she was associated with a TV personality who criticized the Japanese government and two, she created vagina art that did not cater to heterosexual male desire. (This becomes very apparent after Rokudenashiko learns that the police have no idea what crowd-funding is.)

Ultimately, Rokudenashiko was convicted of violating the obscenity law because she transmitted drawings of a real vagina through the internet, not the art she made from it. Western anime fans might find this distinction familiar–detailed images of genitals are not depicted in anime, but tentacle monsters get free reign. Which begs the question–are real vaginas more obscene than fictional ones? And if so, does that mean anyone who has a real vagina, is in volition of the law?

Not simply a story about free speech, Rokudenashiko’s story illuminates the failings of the Japanese criminal justice system, the sexism of the Japanese media and Japanese politics. What is Obscenity? is a definite must-read that shows how obscenity laws are not applied equally.

Next post: See You Space Princess: A Carrie Fisher Tribute