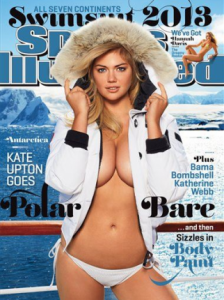 Kim Kardashian. Beyonce. Kate Upton. These women epitomize the beauty ideal in the United States–light skinned, thin, no tattoos or piercings, preferably blonde hair, big boobs and big butt—and no fat anywhere else. According to the ANAD, up to 24 million people of all ages and genders suffer from an eating disorder in the U.S. Women are much more likely than men to develop an eating disorder. So why should we care about this? Because eating disorders have the highest mortality rate of any mental illness. No only does our beauty ideal severely limit our concept of health and beauty, but our obsession of keeping women small and delicate literally kills.

Knowing that, how does Sailor Moon do with body image?

Well, it’s not its strong suit as you can see. I mean, it is called Pretty Guardian Sailor Moon. And, by Takeuchi’s own admission, she loves supermodels. So, Sailor Moon upholds a lot of beauty ideals–light skin, no piercing or tattoos, blonde hair–their boobs and butts aren’t huge, but everyone of these characters are thin. Sailor Moon definitely sends the message that to be a pretty guardian, you need to be thin.

Moreover, the anime has a serious case of “ugly pretty” going on. The people closest to Usagi–Tuxedo Mask, Luna, and Chibiusa–all complain that Usagi is “too fat.” The anime tries to pass this off as a joke, but I think they are pretty poor jokes. I mean, really, “Hey you’re fat!” is not a joke, let alone a funny one!

The anime tackles fatness early on in the series–episode 4 of season one–to be exact. In this episode, everyone including Usagi wants to be thin and the Bad Guys are obviously exploiting that to take their energy. Sailor Moon doesn’t fight against the dream of being thin, but she does fight against those who take advantage of that desire. (Now if only Sailor Moon would take on the diet pill companies that would be cool!)

In Chapter 9 of the Sailor V manga, Sailor V vs Devleene, Devleene makes delicious chocolate so that she can steal their energy at a diet spa. Not only does Artemis say “I don’t want to see a fat Sailor V!” but Minako ends up exclaiming “I’d rather die than see a fat Sailor V!” Oh boy. (I’m beginning to understand why Sailor V wasn’t released in the States until now. -_-;;) In fact, at the end of the chapter, Phantom Ace arrives with a special “candy” that magically melts away the fat the young women have gained from Devleene’s chocolate.

Despite all this, Sailor Moon fans have been inspired by these characters to feel better about themselves. Makoto, Sailor Jupiter, may not be fat, but she has an atypical body type. She is taller than your average Japanese girl–and in Japan, you don’t want to stick out. We may think of being tall and thin as being a requirement for being a supermodel, but femininity often means women must be shorter than men—being too tall means you are masculine. One young woman on the fuckyeahfatpositive tumblr was inspired to cosplay as Sailor Jupiter. The cosplayer, Lauren, explains how Sailor Jupiter inspired her:

I said a big “fuck you” to fat cosplay bashers and cosplayed as my favorite Sailor Moon character, Sailor Jupiter. Not because I thought I looked the most like her out of the characters, or because I liked the colors she wears, but because I identify with the character herself. Although she isn’t fat, she gets picked on for her physical appearance. She’s immensely tall, to the point that she has to wear a different school uniform than everyone else because they don’t have one that fits her. (That one is uncomfortably familiar as it has happened to me more than once at school AND work). People pick on her for her height, and for being “unusually muscular for a girl.” People are reluctant to make friends with her, thinking she looks “mean” because she’s big. She struggles with the masculinity/femininity binary just like I do, feeling she has to over-feminize herself to counteract her physical appearance and tomboyish tastes. She hates bullies, having been bullied a lot herself. She doesn’t take shit from them, often protecting other marginalized people from them. Like me, she tries her best to always be accepting since a lot of people don’t accept her. She’s unwaveringly loyal to her friends and fiercely protective of them, which I admire. Each character in the show is supposed to embody a value, and hers is courage. She does what needs to be done and what’s right regardless of what’s going to happen to her, what people say about it, or what they think of her. I figured I’d take a page out of her book and do the damn cosplay because it doesn’t matter what I look like, or what she’s drawn like, it matters what we’re all like (as someone else put it on this blog a few weeks ago) on the fucked-up inside.

Isn’t she awesome? Rock on!

So, in summary, does Sailor Moon promote fat hatred? On one hand, a main theme of Sailor Moon seems to be one of inclusion–that girls who are too tall or too chubby can be beautiful too. On the other hand, all of the pretty guardians are thin. Sailor Moon does not discourage the dream of being thin, but aims to punish those who use this dream to harm girls.

What do you think? Has Sailor Moon helped you feel better about your body image or has it reenforced negative feelings?