The video opens with a mad doctor scribbling on a white board. We’re informed that Dr. Hack is the master of TV formulas–the formulas individual TV shows use from episode to episode. Here’s his formula for Power Rangers:

Since Sailor Moon was based on the Power Rangers formula, I was eager to hear more about Sailor Moon’s particular formula.

After reviewing the English dub’s opening credits, Nostalgia Critic continues his review by giving a brief overview of the cast of characters. He then spends a considerable amount of time dissecting the transformation sequences.

Nostalgia Critic: And, of course, this gives way into the famous transformation scene–the tiara, the boots, the nail polish-later covered by gloves so that was pointless–and of course, the mini skirt. The mini, mini, mini–mini, mini, mini, mini–mini, mini, mini skirt. Yep, the costume choice that no way enables her to fight better, but sure forces her to squat a lot. OK, so take out the fact that it’s no way battle armor, take out the fact that it’s obviously fan service, take out the fact just like He-Man somehow removing more clothes bizarrely disguises them–though to be fair both these outfits is the face really the first thing you’re going to be looking at?–Take all that away and just tell yourself, this obviously sexualized transformation that takes up a solid minute in each episode happens to a 14 year old girl.

Ok, first of all, Sailor Moon’s transformation isn’t fan service. There are no boob jiggles or butt gleams in these sequences. But of course, viewers can choose what they want to see. If you are are heterosexual male dude, you can choose to leer if that’s how you roll. If you are a heterosexual chick, you are simply seeing a young woman put on a cool outfit. If you are a gay dude, you might not give a shit and if you are a lesbian–well, hey, give me a call when a lesbian comedian calls Sailor Moon’s transformation a “strip tease.”

In fact, this promo sent to TV stations back in the 90s argues that girls will particularly love the transformation sequences where the superhero becomes “glamourous.” The focus of the transformation is the outfit and accessories and Sailor Moon’s moves are not unlike a gymnastics routine or walking down the catwalk. Or, a superhero who is simply getting ready to kick your ass.

Nostalgia Critic’s main beef with the transformation sequences isn’t that they’re sexy, it’s that a 14 year old is being sexy. Much of this section seems to be a reaction to his previous video where he named Sailor Moon one of his top 11 hottest animated women. Some commenters felt that Sailor Moon shouldn’t be described as “hot” because she’s 14 years old. Personally, I have more of a problem with Sailor Moon’s transformation sequences described as a “strip tease.” Cuz you know, putting on clothes is totally the definition of a strip tease. No word on what Nostalgia Critic feels about dude superheroes who actually rip off their clothes. 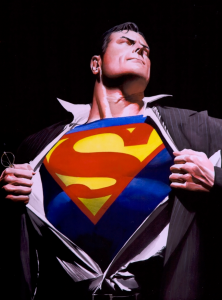 Nostalgia Critic hammers it home that the sexy, sexy transformations are happening to 14 year old girls—as if in the history of the world 14 year olds have never worn a short skirt before or have boobs or have long legs or whatever. To show how sexualized Sailor Moon is, Nostalgia Critic gives us an example of what real, 14 year old girls look like. Note that these images aren’t of young ballerinas, or 15 year old figure skaters. Would anyone like to say that the young ladies below are “dressing like sluts”? (And they lift their legs too! How scandalous!) 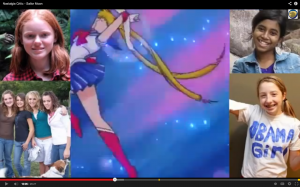 Nostalgia Critic shows us what real 14 year olds look like.

Nostalgia Critic comments that the problem with the sexualization of girls in media is that it doesn’t teach young people about real life sexuality and merely profits off of said sexualization. But here’s the problem. When you describe a girl in a short skirt and heeled boots as a “slut,” you are making a huge assumption about that girl’s sexuality based on only what you see–not on any actual first-hand knowledge.

What’s really happening here is that Nostalgia Critic is just re-enforcing the same old sexist belief that girls are to blame for a dude’s behavior, not the dude himself. If only Sailor Moon didn’t wear such a short skirt! Then! And only then, nobody would call her a slut! This don’t-blame-the-dude game continues with Nostalgia Critic suggesting that we blame Japan instead. Japan is the “creepy” and “kinky” one, you see, because the age of consent there is 13–it’s not Nostalgia Critic calling 14 year olds “sluts” or seeing their transformations as a “strip tease.”

It’s too bad that Nostalgia Critic didn’t review America’s consent laws. Although the average age of consent is 16, America also has similar close-in-age-exceptions as those in Japan. And surprise, surprise, some states allow for 14 year olds to have sex with teens who are only 2 – 4 years older than them. However, here’s the thing about laws. Their existence or lack thereof isn’t some smoking gun. For example, America has laws criminalizing rape, but that doesn’t stop people from arguing that an 11 year old victim “dressed older than her age.” Or, when rapists are convicted, people still blame the victim. Japan may have a club where you can pay to sexually harass young woman in school girl outfits, but you can do the same in America and just hope the woman can’t or won’t come after you.

But if you haven’t been convinced yet that you should be blaming Sailor Moon’s sartorial choices or sexually deviant Japan instead of, say, Nostalgia Critic, he tells us he just didn’t know how old they were–because they look sexy.

At the risk of taking this waaaaay too seriously, I just want to remind our friendly viewers at home that in a court of law, you actually can’t use the “I didn’t know her real age” defense. 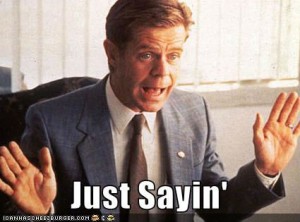 But before you can reach for your Captain Picard facepalm pics, Nostalgia Critic would like to give us one last reason why you shouldn’t blame him for sexualizing teen girls in mini skirts: his penis, like all heterosexual teen penises, is a metaphorical gun to his head. 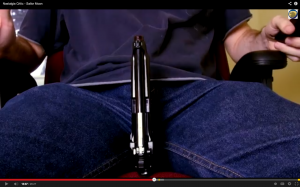 Penises don’t force anyone to use the word “slut.” This may seem funny and inconsequential to some people, but in real life, people pretty much believe this. This video is a great piece of evidence of how we believe, as a society, that male sexuality is aggressive and uncontrollable–and thus, any dude can’t be held accountable for his actions. While some people may think that this is just a joke, this belief has real consequences in our lives. In 2010, a young girl was repeatedly raped and videotaped by multiple boys and men and people commented: she did wear sexy clothing, you know.

Residents in the neighborhood where the abandoned trailer stands — known as the Quarters — said the victim had been visiting various friends there for months. They said she dressed older than her age, wearing makeup and fashions more appropriate to a woman in her 20s. She would hang out with teenage boys at a playground, some said.–March 8th, 2011, nytimes.com

I’m not sure why dressing like a 20 year old or wearing “sexy” clothing makes rape inevitable. But I suppose we just need to remember that seeing a girl or woman dressed sexy is like your penis putting a gun against your head. Then, this senseless violence probably makes more “sense.”

One last thing I’d like to point out, since we’re taking about sexy clothing and all. In the flashback, the hypersexual 14 year old Nostaglia Critic with a metaphorical penis gun wears a black t-shirt and blue jeans. Remember when Nostaglia Critic showed us pictures of real 14 year old girls? You know, the ones wearing t-shirts and blue jeans? The ones who were decidedly not sexy? Again, it’s perfect example of how we as a society view male sexuality and female sexuality–dudes are hypersexual beings no matter how they dress, but female sexuality only exists when a woman or girl wears something sexy. That, of course, is completely illogical, but I doubt our patriarchal society wants to hear that.

Thankfully, at this point, after a few drinks, Nostalgia Critic moves on–but not quite. He notes again, how stupid Sailor Moon is, the censorship of Sailor Neptune and Uranus’s lesbian relationship and a lack of physical fighting. But not without making more pot shots about Sailor Moon’s outfit which is basically “a bathing suit with napkin covering the crotch” and that Japan is totally cool with Sailor Moon “showing off her goodies to the world” if she lifts her leg even a centimeter. Nostalgia Critic chalks this up to “cultural differences” and admitting that America has produced much worse things like toddlers dressed as Madonna. But it’s waaaay too little, waaaay too late.

Unfortunately for Nostalgia Critic and this video, victim blaming and sexualization aren’t merely cultural differences–they’re are behaviors we find in any patriarchal, xenophobic society that doesn’t want to be held accountable for its own horrible behavior. And if there’s one thing worth remembering about this video, that would be it.

Biked to Bryant Park today to meet up with my frie